The words above were spoken by the Rev Simon Taylor, Rector of St Peter’s Church, Hambledon, at the funeral of long-standing and much-loved village resident Edna Atkins.

However, he used them in a wider context, reflecting that Hambledon was witnessing the passing of several notable residents who have done so much to enrich life in our small village.

The same church will soon see villagers pay their respects to another stalwart who leaves a substantial legacy across Hambledon. The funeral of Muriel Campbell will take place at 2.30pm on Thursday December 9th. 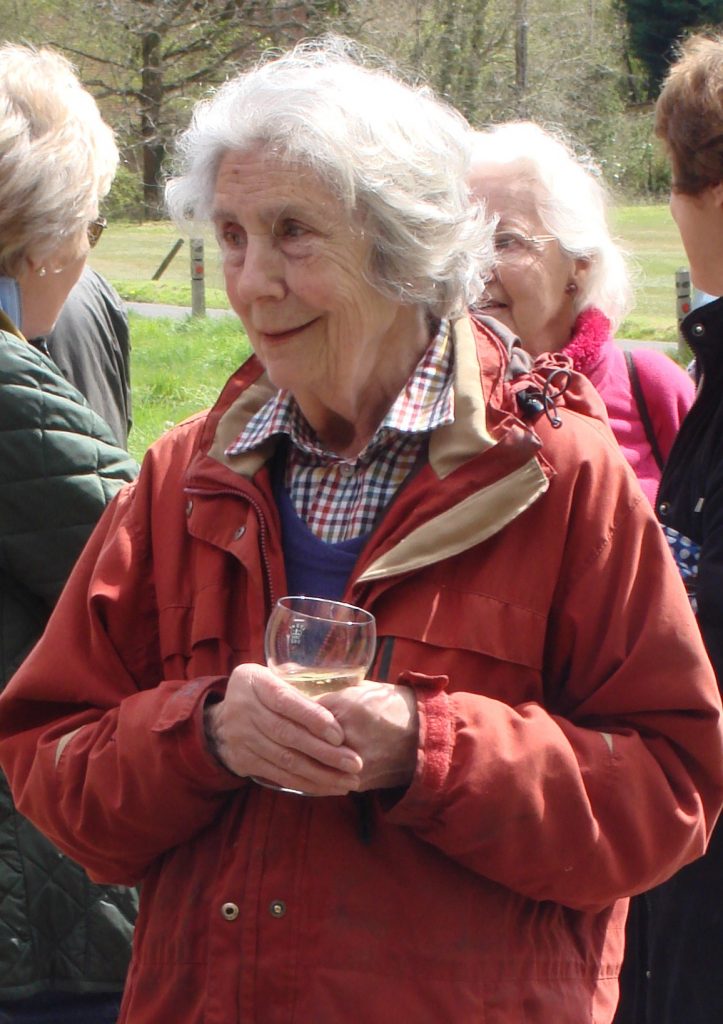 Much that younger generations can take for granted is testament to Muriel’s love of Hambledon and its people. She has been active in many areas of village life, most notably in helping spearhead the campaign to keep the former Church of England village school as a place of learning after it closed as a State-run primary in July 1983.

She was central to the campaign to acquire the Victorian classrooms and playground at Rock Hill, rather than see it sold off as a private house or for development. Out of this initiative grew the flourishing Nursery School that is so popular today. It is run by a charitable trust and Muriel was one of the early trustees.

Muriel was also a member of Hambledon Parish Council between 1987 and 1995 and her husband Ion was, for many years, its chairman.

Muriel and Ion have also worked hard to maintain their family home at Feathercombe, which was built in 1910 for the celebrated author, journalist, broadcaster and naturalist Eric Parker. Muriel is his grand-daughter.

Muriel’s funeral is expected to be well attended as she had a large extended family as well as a great many friends. Village mourners are requested to walk or share a lift to the church if possible. There will be a reception afterwards at Feathercombe.

Hambledon sends its sympathy to Ion and the Campbell family.

Caroline and family warmly welcome everyone to Edna’s funeral at St Peter’s Church on Thursday 25th November at 11am and afterwards in the church rooms.

Village resident Cathy Coleman has set herself a target of raising £500 for a cancer charity that makes wigs for young children who have lost their hair during treatment. To do so, she is cutting 14 inches off her hair to donate to the Little Princess Trust.

It is a great cause, and Cathy is asking for help from villagers to help her meet her target. For details of how to donate, please read on.

I am cutting 14 inches off my hair and donating it to the Little Princess Trust. This incredible charity creates wigs for children who have lost their hair due to cancer treatment and other illnesses. The charity aims to give them a little more confidence and a sense of normality when their whole world has been completely changed.

Along with everyone else I was unable to get my hair cut throughout the pandemic. I wanted to create something positive out of a pretty horrible couple of years. The Little Princess Trust do a brilliant job of supporting young people through a troubling time in their lives, and the charity also funds vital research into cancer treatments.

I am asking for donations to help me raise £500, which is how much it costs to create and fit a wig. The link for my fund-raising page is below, there is also a donation box at the Merry Harriers pub:

For more information on what the Little Princess Trust does please visit its website (https://www.littleprincesses.org.uk) where you can also find details on how to donate your own hair if you want to support a great cause.

Thank you in advance for any donation you can give.

The Village Hall Committee are very pleased to announce the long-awaited return of the Village Quiz!

Due to Covid restrictions we aren’t providing a meal this year so do bring your own snacks.
Cash bar and raffle available as always!

To enable distancing between tables we are selling much fewer tickets than usual. Tickets always sell out quickly so we expect them to be gone even more quickly than usual this year.

Tickets £8 from the Village Shop while they last!
Maximum team size 6.

The performance is on Saturday, November 13th at 7.30pm. Tickets are available at the Village Shop and at ticketsource.co.uk (£14 for adults, £11.50 concessions and £40 for a family of four).

This is the first performance at the Hall since the start of the pandemic and, in order to maintain social distancing, we will be selling a reduced number of tickets so please do buy yours early to avoid missing out!

Please get in touch with Ruth Canham at villagehall@hambledonsurrey.co.uk for information on Covid-safety at the hall.

Age 12 years and above