Dunsfold Park’s Garden Village Masterplan is being formed and the developers have staged an exhibition as part of their consultation process.  You are most welcome to visit.

The exhibition runs on the 13th and 14th November at Business Unit 217 on the Dunsfold Business Park site, and moves on to Cranleigh Arts Centre ( Friday 15th ), Godalming Borough Hall ( Saturday 16th ) and then back at Unit 217 on the 17th and 18th.

The developer’s team will be on hand for questions and answers on the design ideas, energy efficiencies, communal areas, support facilities, and the first stage – the new access road.   You can also ask them to explain how “encouraging” sustainable travel is meant to work.

The extensive detail of the exhibition display is replicated in their Masterplan brochure. (click to view)

END_OF_DOCUMENT_TOKEN_TO_BE_REPLACED

The charity Butterfly Conservation have set up a 3 year project in your area to help one of the rarest butterflies in the UK.  The Wood White Leptidea sinapsis has just one remaining population in the South East, and this is found in a few locations around Chiddingfold, Dunsfold, Plaistow, Grayswood and Northchapel.  We will be working with Forestry England, the Woodland Trust, National Trust, Sussex Wildlife Trust and parish councils on sites in the area to create more suitable habitat for the butterfly and link up isolated small colonies.  If we manage to create enough ‘stepping stones’ of Wood White habitat in the landscape, we hope that small colonies can link up, start to spread and become less genetically isolated from each other.

END_OF_DOCUMENT_TOKEN_TO_BE_REPLACED

Training in the use of defibrillators (AEDs) is being offered to residents following the installation of one inside the former telephone kiosk at the Hydestile Crossroads.

This takes the number of defibrillators in the village area to five; outside the village shop, on the exterior wall of the Merry Harriers, at St Peter’s Church, at Hambledon Football Club’s ground at Badger Park, and now at Hydestile.

Alison Martin, a Busbridge Parish councillor who helped arrange for the AED (automated external defibrillator) to be installed in the traditional red kiosk – which has also undergone renovation in the process – has arranged for a training session to be held in the meeting room at St Peter’s Church, Church Lane, Hambledon, on Saturday September 28th. 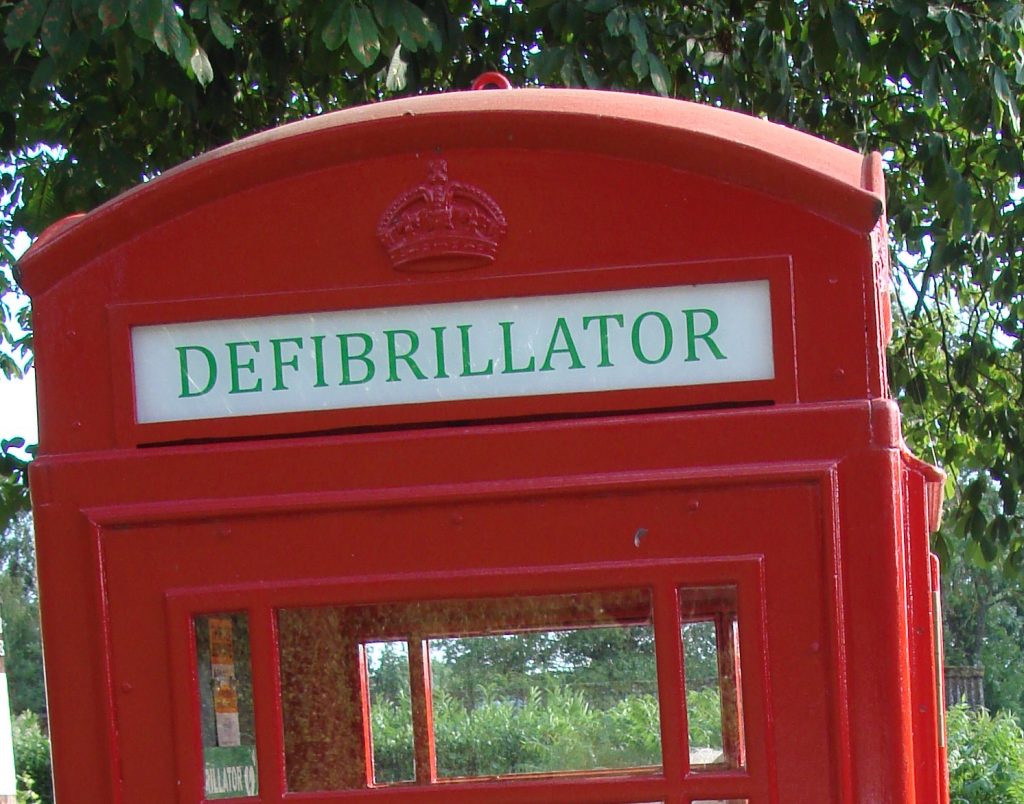 The training will be given by an expert from the London-based Barts City Life Saver organisation, a charity that teaches life saving skills and originated from St Bartholomew’s Hospital. The session begins at 11am with basic life saving training, then AED training at 2pm followed by baby and child resuscitation at 3pm. Participants can opt to attend the whole session, or part.

AED’s are used on people suffering from sudden cardiac arrest and, along with Cardio Pulmonary Resuscitation, can greatly increase survival rates.

Training will be free to the Hydestile volunteers on the Busbridge Parish Council-sponsored rota, but to all others there will be a nominal cost of £20 per person to cover the costs of the trainer travelling to and from London and a donation to the charity’s work.

Anyone in the village can register to attend. Please contact Alison Martin at email amtillies417@gmail.com or by phone on 01483 893619.

If you would like to know more about the work of the charity please visit www.bartscitylifesaver.org

The 2019 Hambledon Village Show will take place at The Village Hall on Saturday 31st August. More details can be found on the Village Show website at: hambledonvillageshow.co.uk. 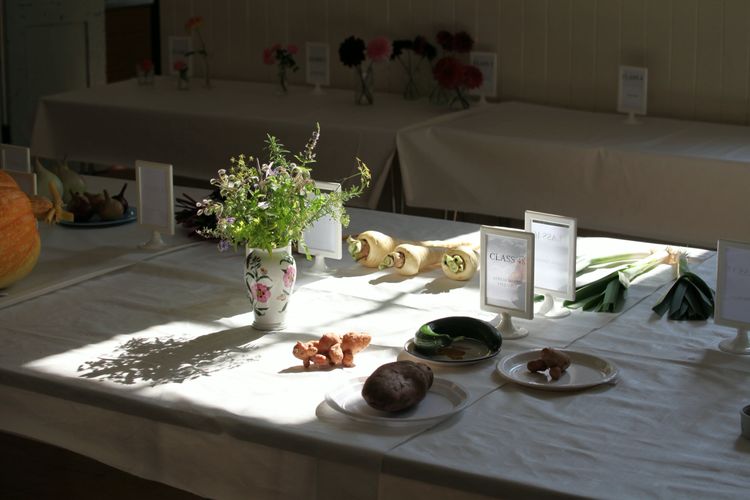 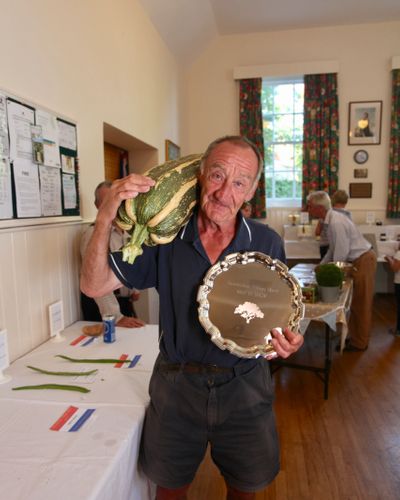 The Village Hall Committee had a very successful day at the fete on Saturday 23 June. Thank you to everyone who came to our stall and to those who generously sponsored a chair. 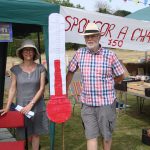 We have now reached the fantastic total of thirty five on our ‘chairometer’ shown here alongside Ruth Canham and Paul Vacher from the Village Hall Committee.  This leaves just fifteen to reach our goal of fifty new chairs.

If you would like to sponsor a chair for £50 then please contact Ruth Canham on 01428 685 729 or mail@ruthcanham.co.uk. You can pay by cash, cheque (payable to Hambledon Village Hall) or bank transfer.

If we get to the happy situation of having more than fifty sponsors, we will use the money to start recovering our existing chairs to match the new ones; fifty pounds will pay to have two chairs recovered.

Thank you very much for your support.

We are currently recruiting for Oakhurst Cottage guides to join our friendly team of volunteers. Help us to tell the story of this historic cottage and give engaging tours to visitors from all over the world. This is a brilliant opportunity to make friends and learn all about a cottage with a history spanning over 400 years. We’re open to the public on Wednesday, Thursday, Saturday and Sunday afternoons between April and October and we ask that you are available at least once a fortnight to lend a hand. Applications are now open  and we look forward to hearing from you.

If you have any queries, please don’t hesitate to get in touch via oakhurstcottage@nationaltrust.org.uk/

Hambledon Nursery School is looking for a new teacher following the decision by Rosemary Kiley to retire after 27 years.

Rosemary joined the school in January 1991, just after her own children finished at the nursery. She is a popular and respected member of staff. Head teacher Nicola Collett said Rosemary would be much missed when she leaves at the end of term.

In the meantime, she is seeking a new nursery practitioner to work four morning a week. Anyone who would like to apply should contact her at the school on 01428 684892 or by email on office@hambledonnurseryschool.co.uk. 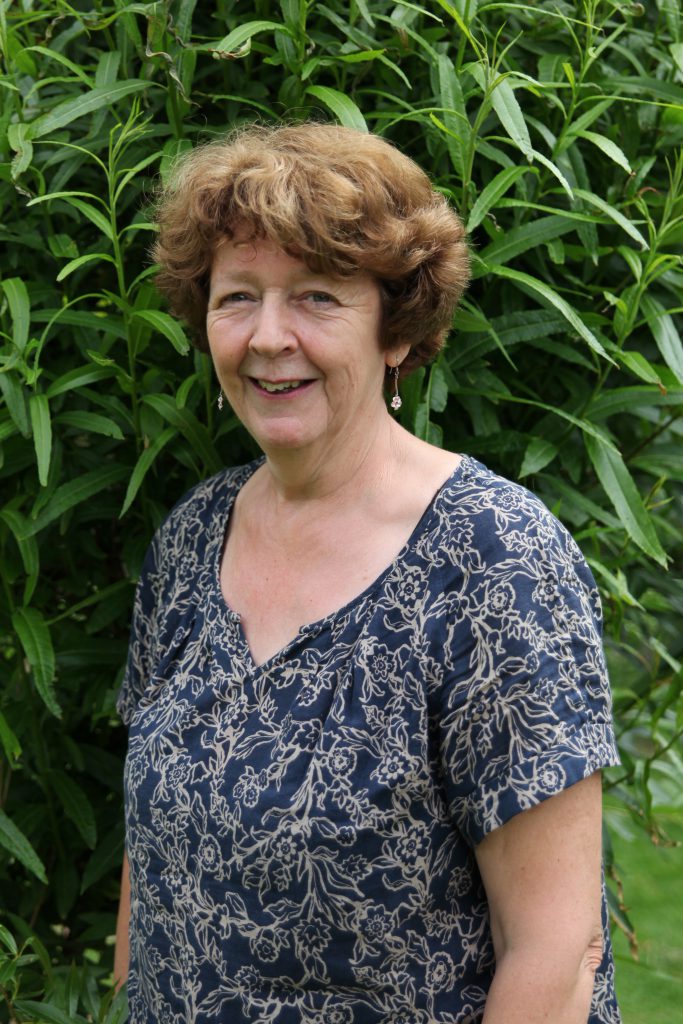 The nursery, at Rock Hill, Hambledon, occupies the buildings of the former Hambledon Church of England state primary which, like many small rural schools, closed in the 1980s. Residents were determined that it should remain a place of learning at the heart of the community and a campaign led to the acquisition of the Victorian schoolhouse and playground at Rock Hill.

It reopened as a nursery for children aged two to five and has gone on to be adjudged “outstanding” by the government’s inspection body Ofsted.

The nursery had not long been in business when Rosemary joined the teaching staff and she recalls that in those early days the admissions list was recorded on a piece of cardboard. With a small but dedicated teaching staff, a school secretary, and overseen by a locally-appointed Board of Trustees, it has gone from strength-to-strength and is sought after by parents from the village and further afield.

Nicola said: “A happy working environment is reflected in the longevity of service of Rosemary and, indeed, other nursery practitioners”.

In retirement Rosemary (pictured) plans to focus on her flower arranging and will be holding a small sale of her creations at the nursery school on Saturday December 9 at 10am. Recently she supplied arrangements for the current BBC television adaptation of the E.M Forster novel Howards End, much of which has been filmed in Hambledon.

The Merry Harriers is undergoing refurbishment under its new ownership, beginning with a striking new sandy-coloured forecourt surface already labelled by locals as “the beach”.

International businessman and entrepreneur Peter de Savary and his family acquired the pub a month ago from previous owners Colin and Julie Stoneley. Regulars at the 16th Century freehouse said a fond farewell to Colin and Julie, who ran the pub for nine years, taking over from the Beasley family, who had been in residence for the previous 40. 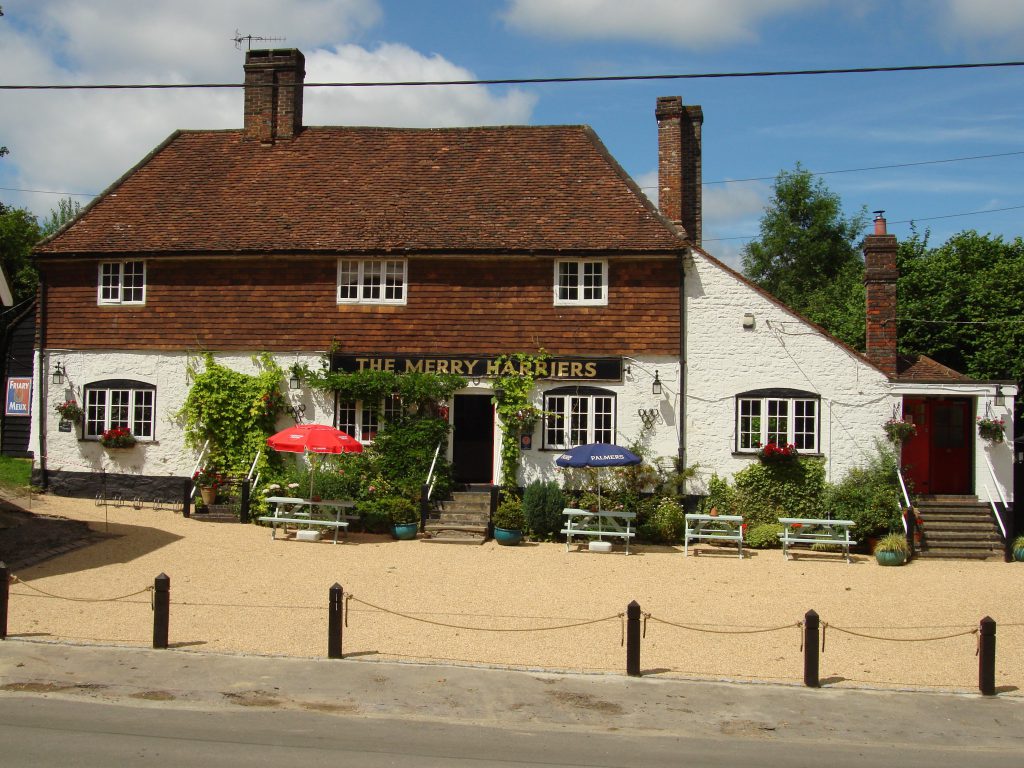 In a Facebook posting as they prepared to depart the Stoneleys wrote: “We hand over the Merry Harriers to the next “caretakers”. It has been an absolute pleasure to be a part of its 427 year history and to have worked with, met and served so many fabulous people. Thank you for your support…and keep supporting your village pub for many years to come.”

Their final weekend on May 20th and 21st was celebrated with live bands and the Stoneleys said that they were proud of the variety and quality of the music sessions staged during their time at the helm.

The de Savary family, who recently moved into the area, have ambitious plans for the Harriers and Peter de Savary is expected to attend a forthcoming meeting of the parish council to outline his proposals. In the meantime a great deal of work has been undertaken, including the new surface, a sprucing up of paintwork and signs, new benches, landscaping and kitchen equipment.