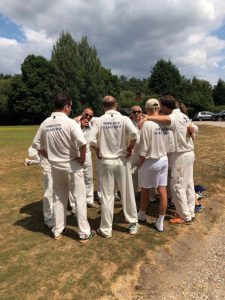 The Team take a moment

It was a lovely day: sun shining but not so much as to fry the fielders or blind the batsmen. The two teams turned up and immediately it was clear who were the more professional: not only did the Hambledon Village Shop XI knock the sartorial spots off with the most elegantly tailored team shirts, but also they gathered, just like the Fijian rugby team, in a tight morale-boosting and shoulder-hugging huddle to listen to a passionate Captain’s passionate words of encouragement, inspiration and oppo-bashing. Fired up and feeling fearsome, the HVS XI won the toss and opted to bat. Bottles of beer were opened in celebration: perhaps a little early, but the Dutch courage argument seemed to hold sway.

At this point the Hambledon Friendly XI, who, above all, were friendly, gently pointed out that there appeared to be 13 players in the HVS XI. Expressing surprise, the HVS XI entered negotiations. After some diplomatic to-ing and fro-ing, agreement was reached: all 13 should be allowed to bat, if needed, in the allotted 30 overs, but only 11 would be allowed to field when the time came (if only Brexit negotiations could be handled with such courtesy and confidence).

The Hambledon XI took to the field and the HVS XI openers took to the crease. The young opening bowler marked out his run-up… my goodness, it was long. He seemed to be marching off to the top end of the Common… he turned… ran in and delivered a blistering opening ball that rocketed into the wicket-keeper’s gloves with the thumping sound of a heavy whiplash. The batsman was unperturbed. He swung his bat in practice, adjusted his glasses and settled down to wait for the next delivery – which, quite naturally, took about ten minutes to arrive – by the time the bowler had re-visited the Common and set off on his run. Much to the delight of the HVS XI, the second ball was punched to the boundary for 4 runs. 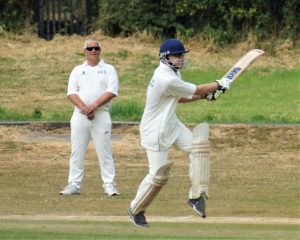 And so it was to be: the HVS XI opening pair took the sting out of the Hambledon XI attack and both scored handsomely without losing a wicket. In fact, they had to retire to let the others have a go. The others did have a go and there were some notable performances on both sides. Peak perfection for the fielding side came when their older statesman (approaching his 80th birthday) bamboozled two of the HVS XI’s finest batsmen and had them summarily stumped and left high and dry. Catches were caught, sixes were hit, wickets rattled and batsmen were run out – oh, and hereby the most politically controversial moment occurred. The HVS XI’s star female batsman, sorry, batsperson, who has never played this game before, was run out on her first ball and not a moment of forgiveness was offered by the fielding side. So much for diversity. So much for chivalry. So much for fair play… the HVS XI were really angry now…

In the end, the till operators, the deli staff, the shop maintenance team, the washer-uppers and the cardboard recycling crew scored 215 magnificent runs in their 30 overs. Even the Shop Manager, who had taken 5 minutes off from her duties to come and offer support, was impressed by such skill and derring-do.

The Hambledon XI’s response was determined. The opening batsmen sauntered out to the middle looking relaxed, confident, experienced. They were looking forward to seeing off any feeble attempt at aggression and to ratcheting up a magnificent score in absolutely no time. The HVS opening bowler, however, looked menacing. He’s a fine figure of a man and set off to mark out his run-up… oh no! He not only reached Hambledon Common… he went further! And when he ran in we could feel the earth vibrate and hear his snorting breath… and then the first ball was delivered… it… looped… it circled… slowly… tantalisingly slowly towards the batsman… who had no idea what was going on… was already on the back foot in anticipation of a bullet… and who completely mis-timed his shot. And so it was to be. A combination of raw talent – disguised as bumbling ineptitude – and the native cunning of the Shop’s volunteer cohort managed to dismiss the Hambledon XI for 141 with 8 overs to go. 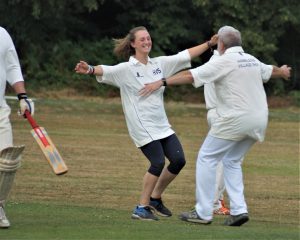 Victory was secured and the Hambledon Village Shop XI had lived up to their shirts. What little beer and wine remained was then consumed and a magnificent BBQ was enjoyed by everyone. The organisers (you know who they are) are to be thanked hugely, as well as the representatives of the Cricket Club who made it such an enjoyable afternoon.

Thanks to Ged and SJ for the photos, double click/tap on the gallery below to see them in full size. 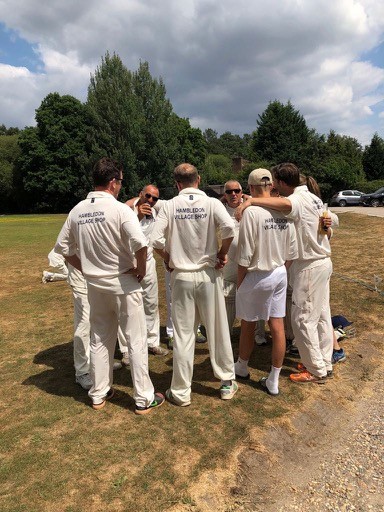 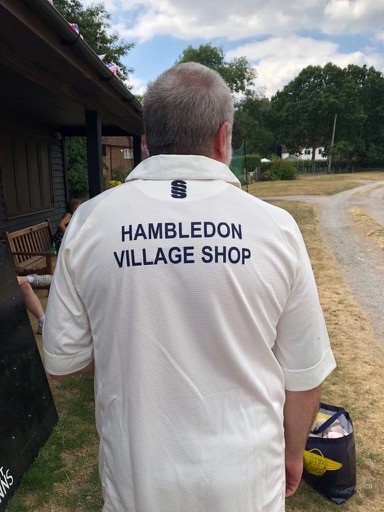 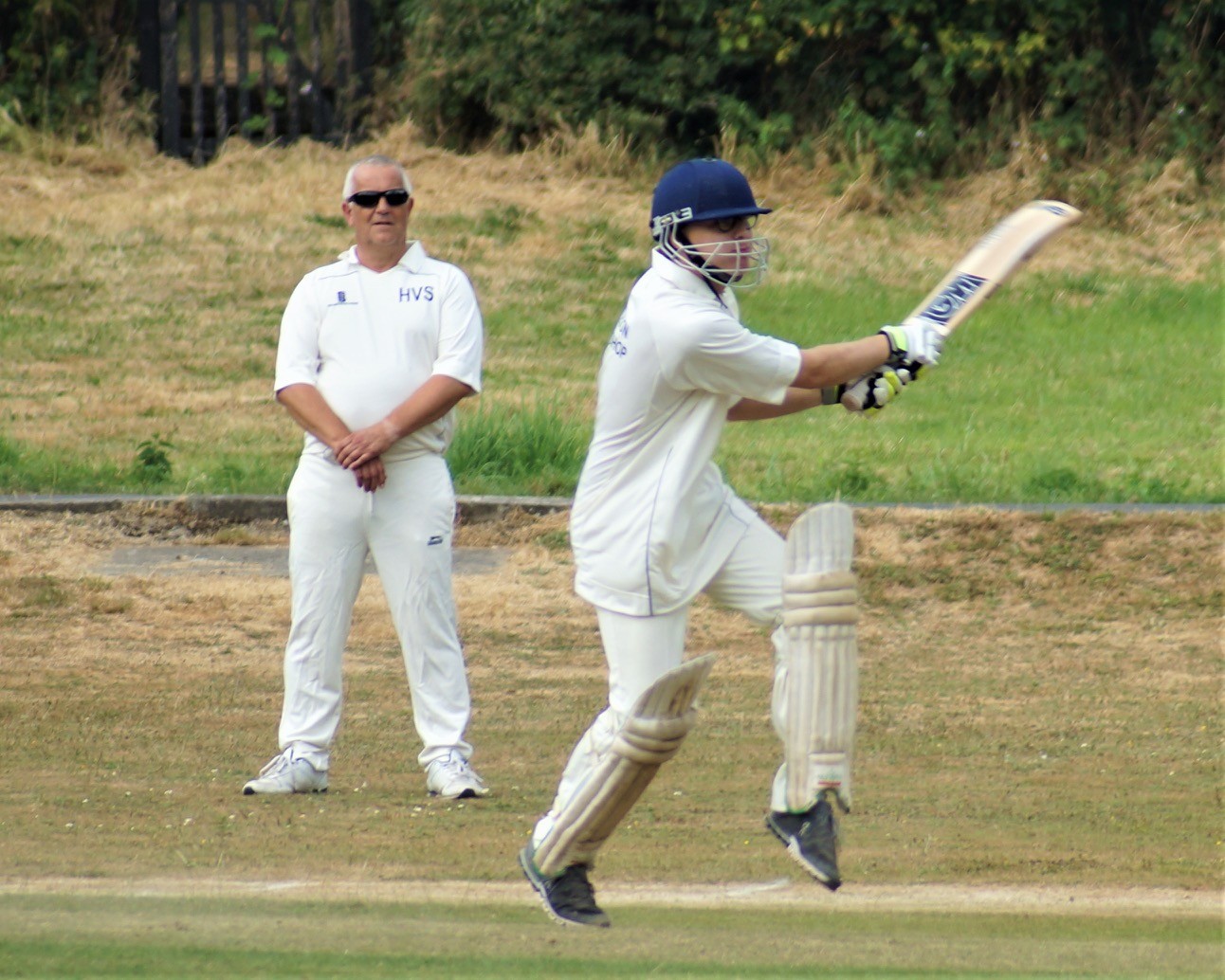 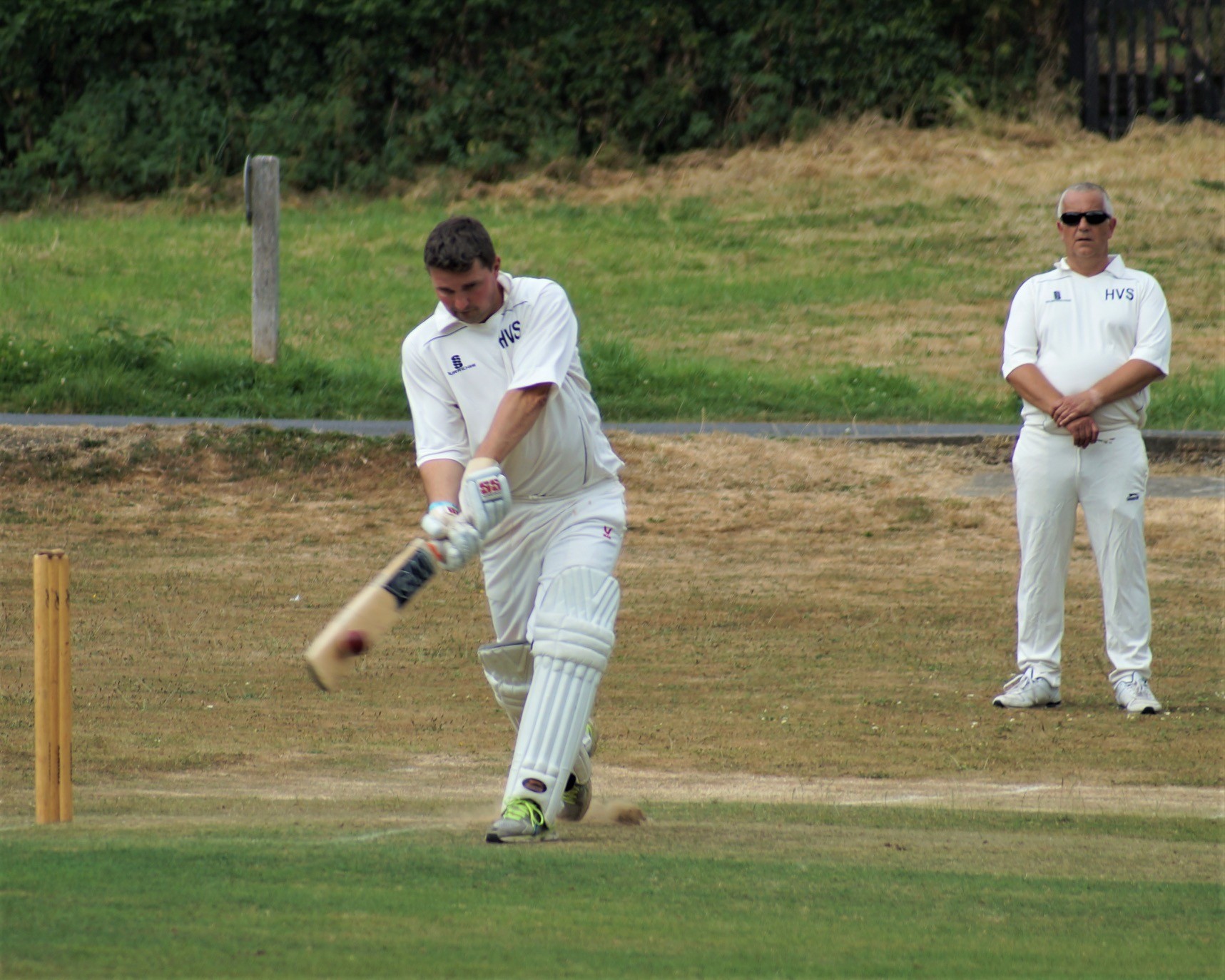 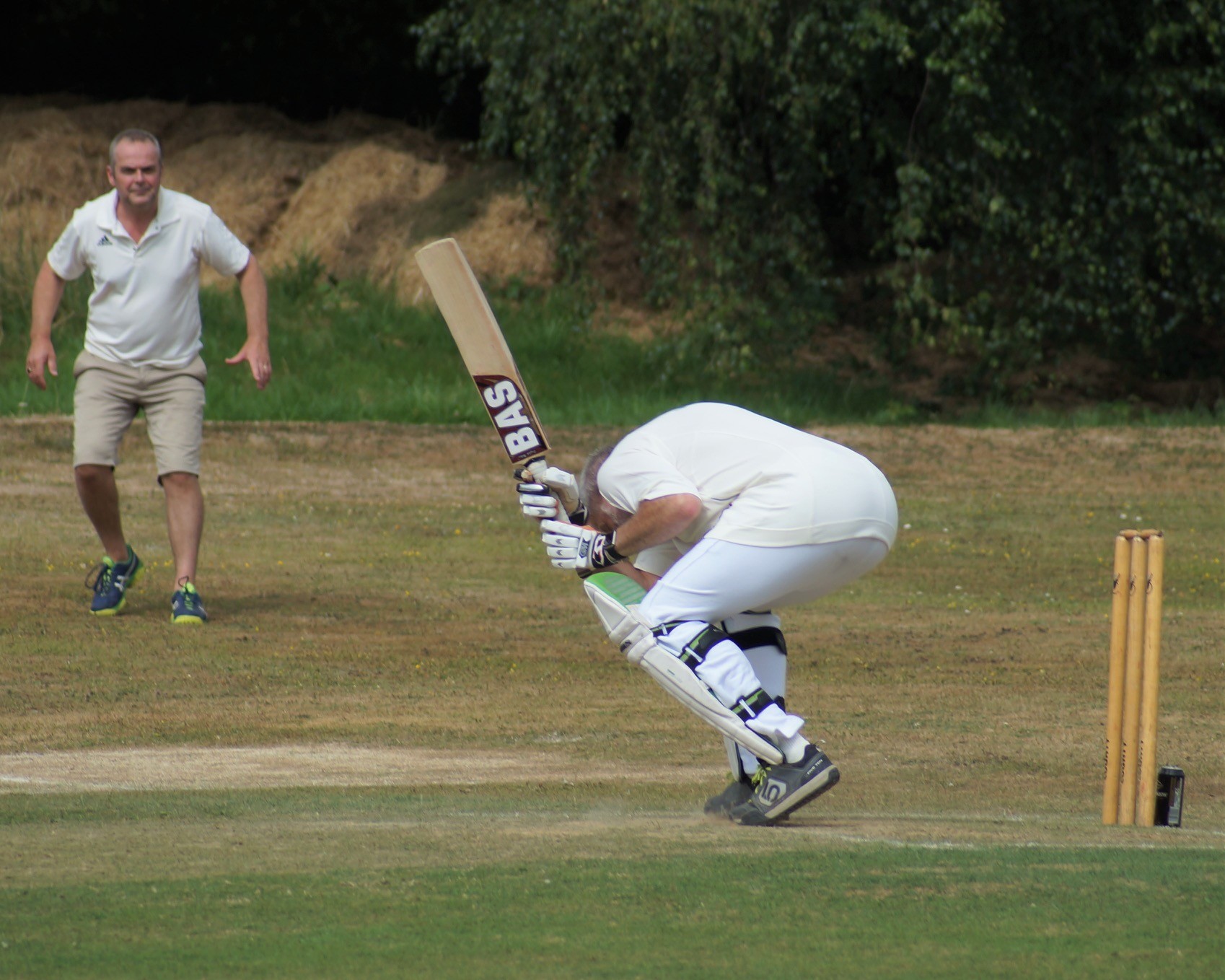 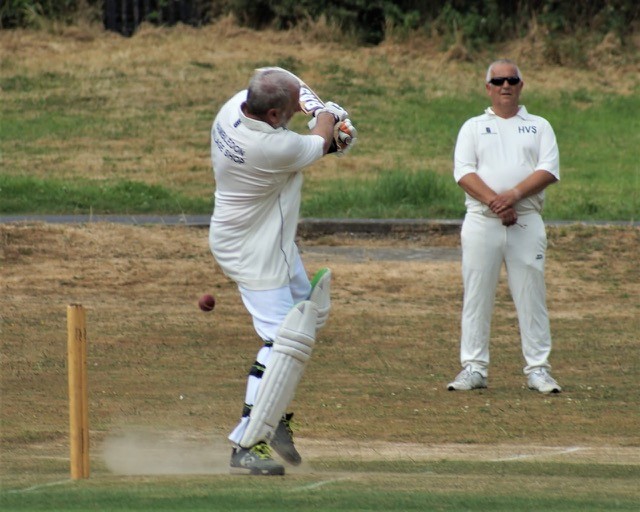 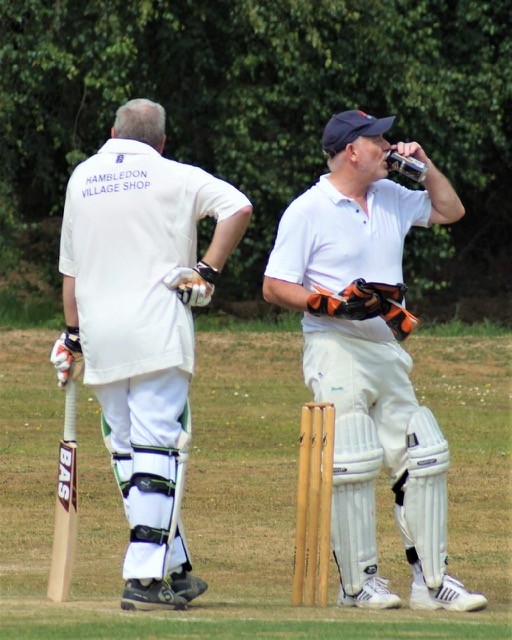 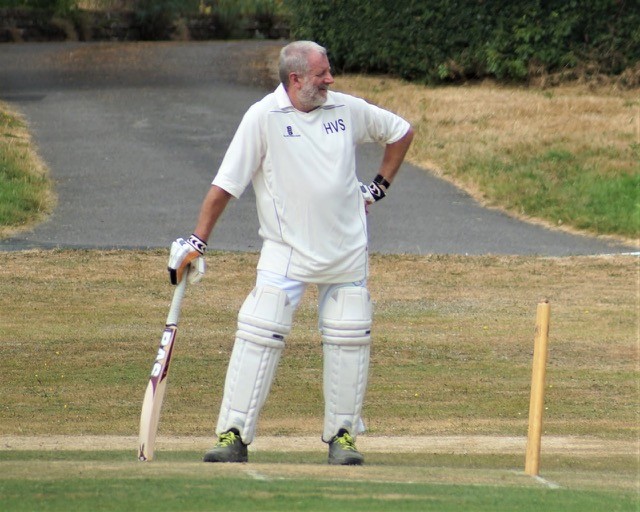 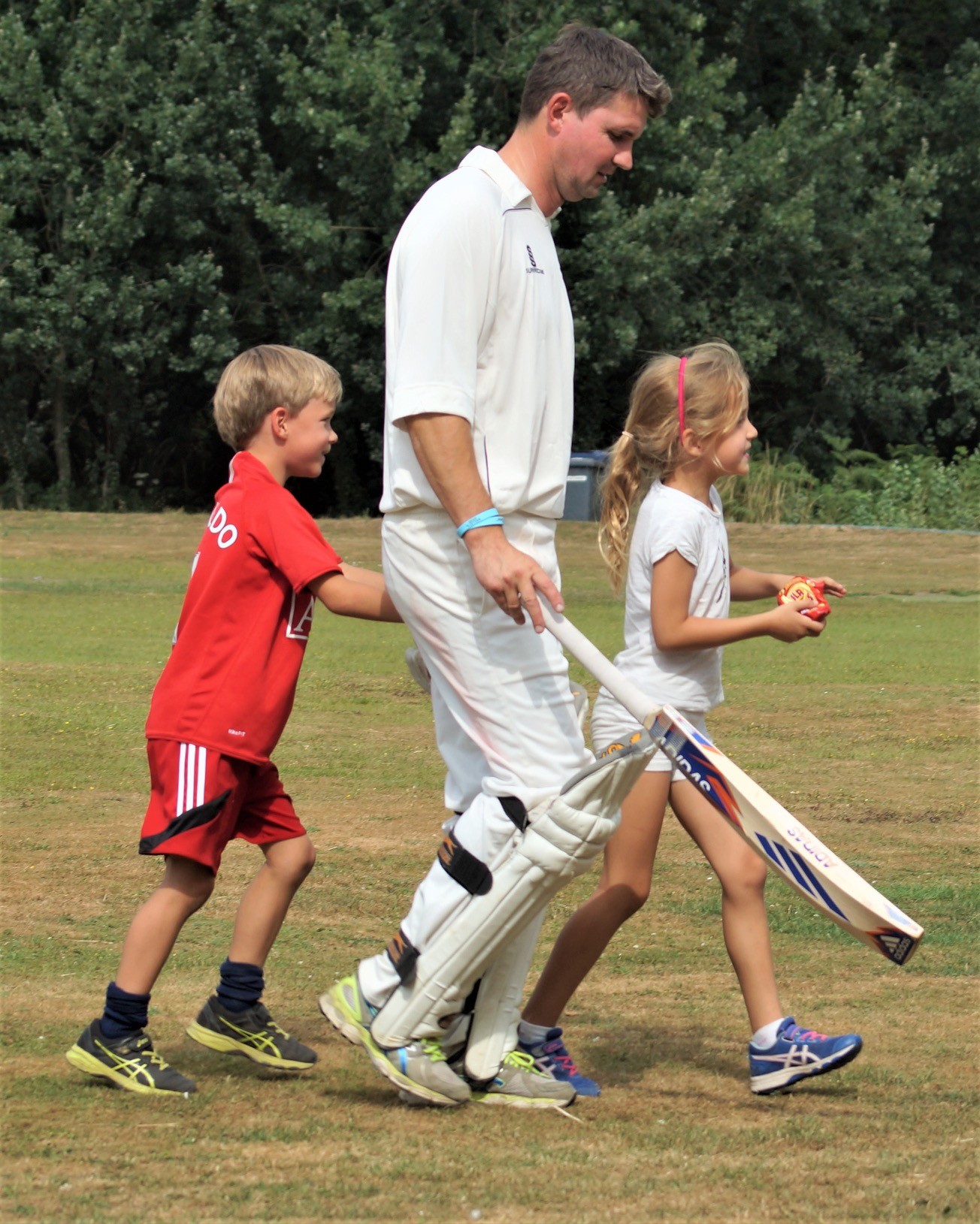 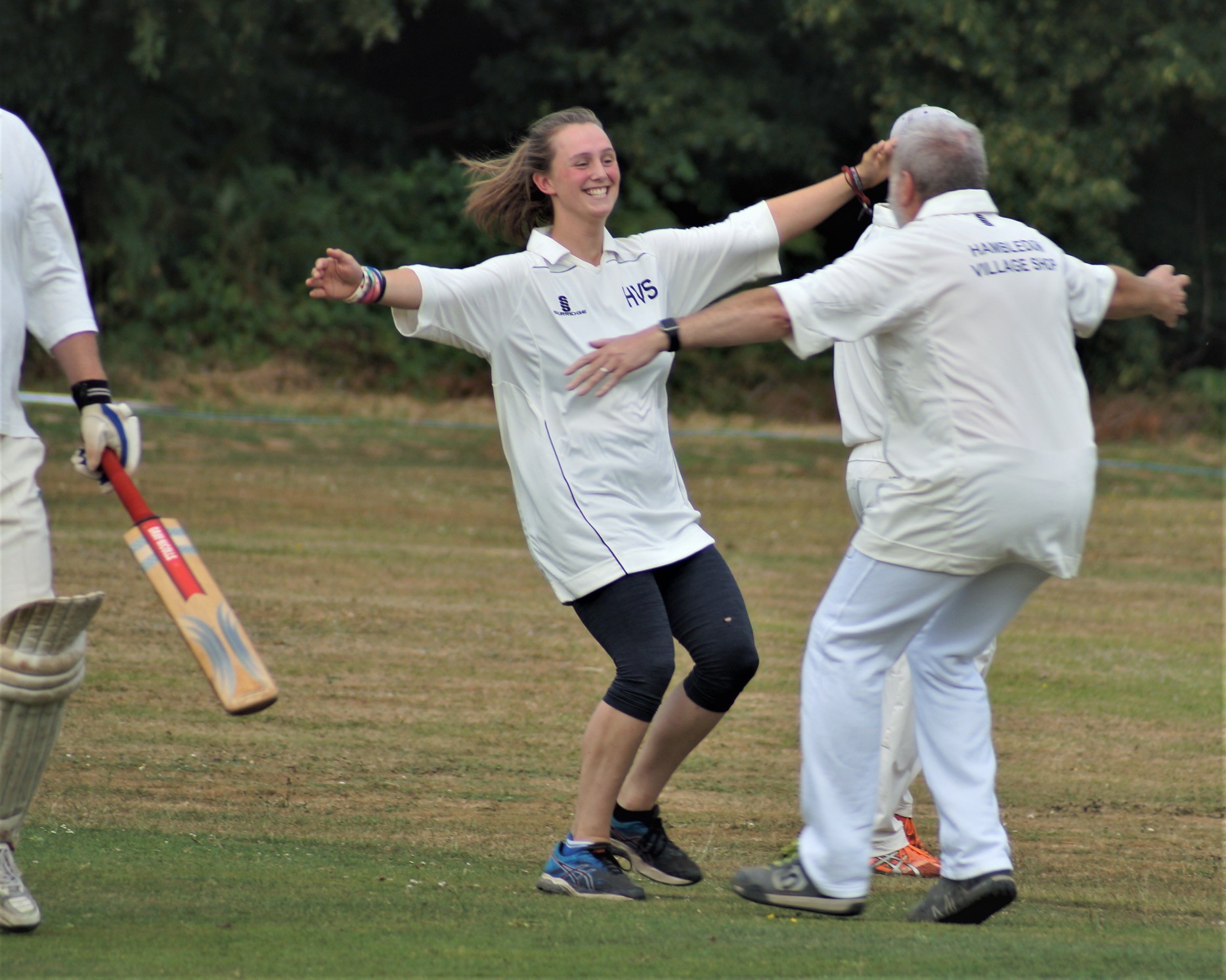 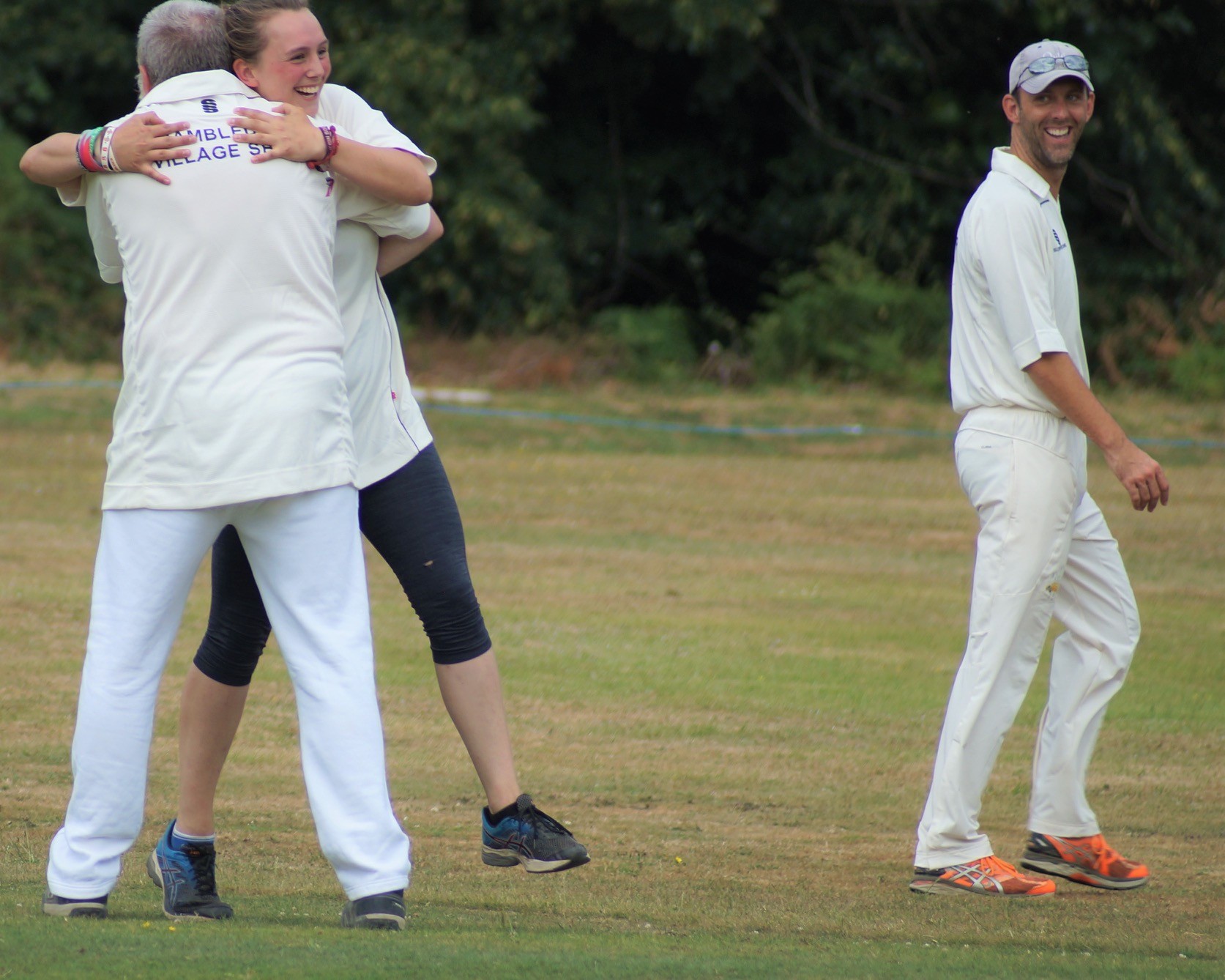 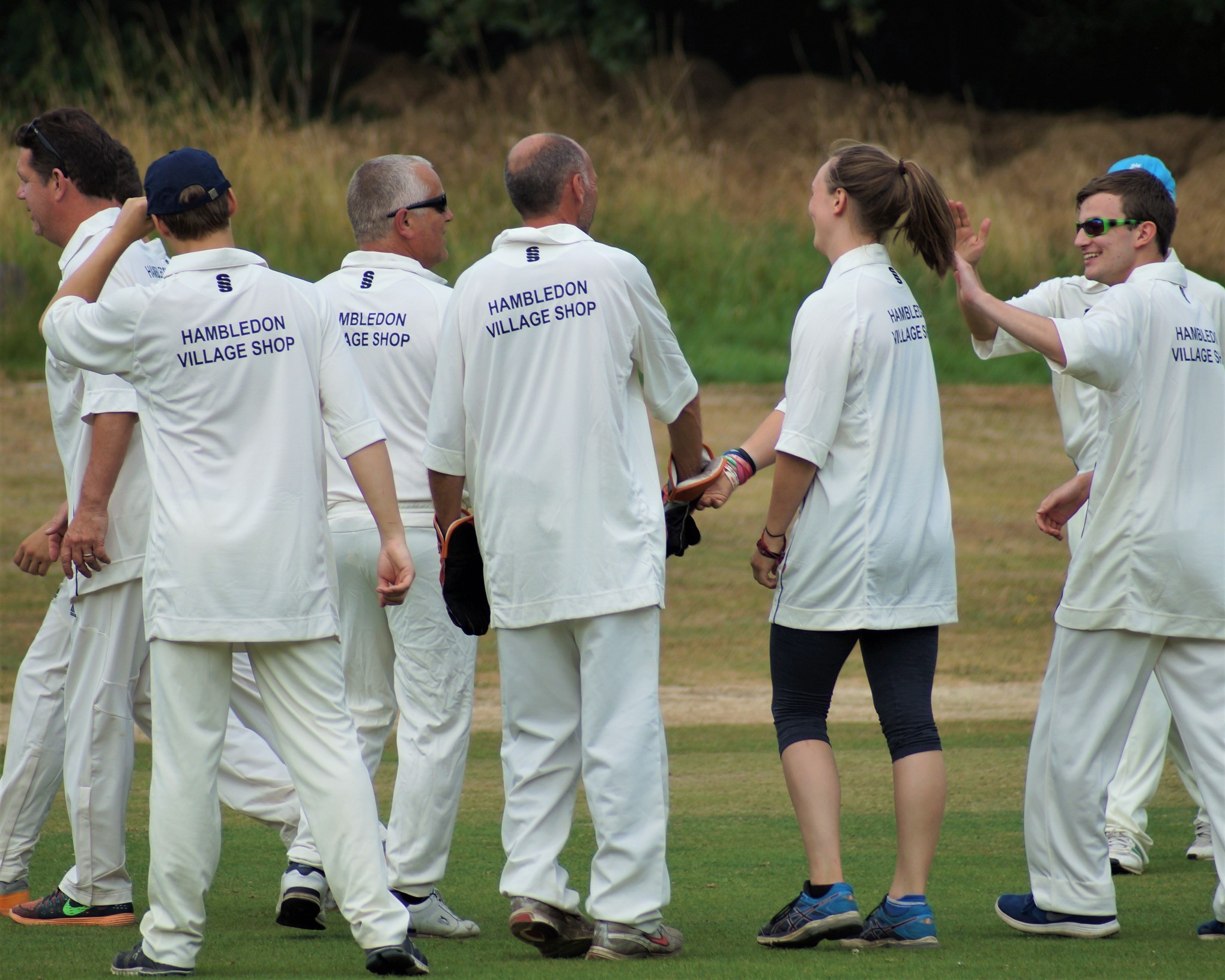 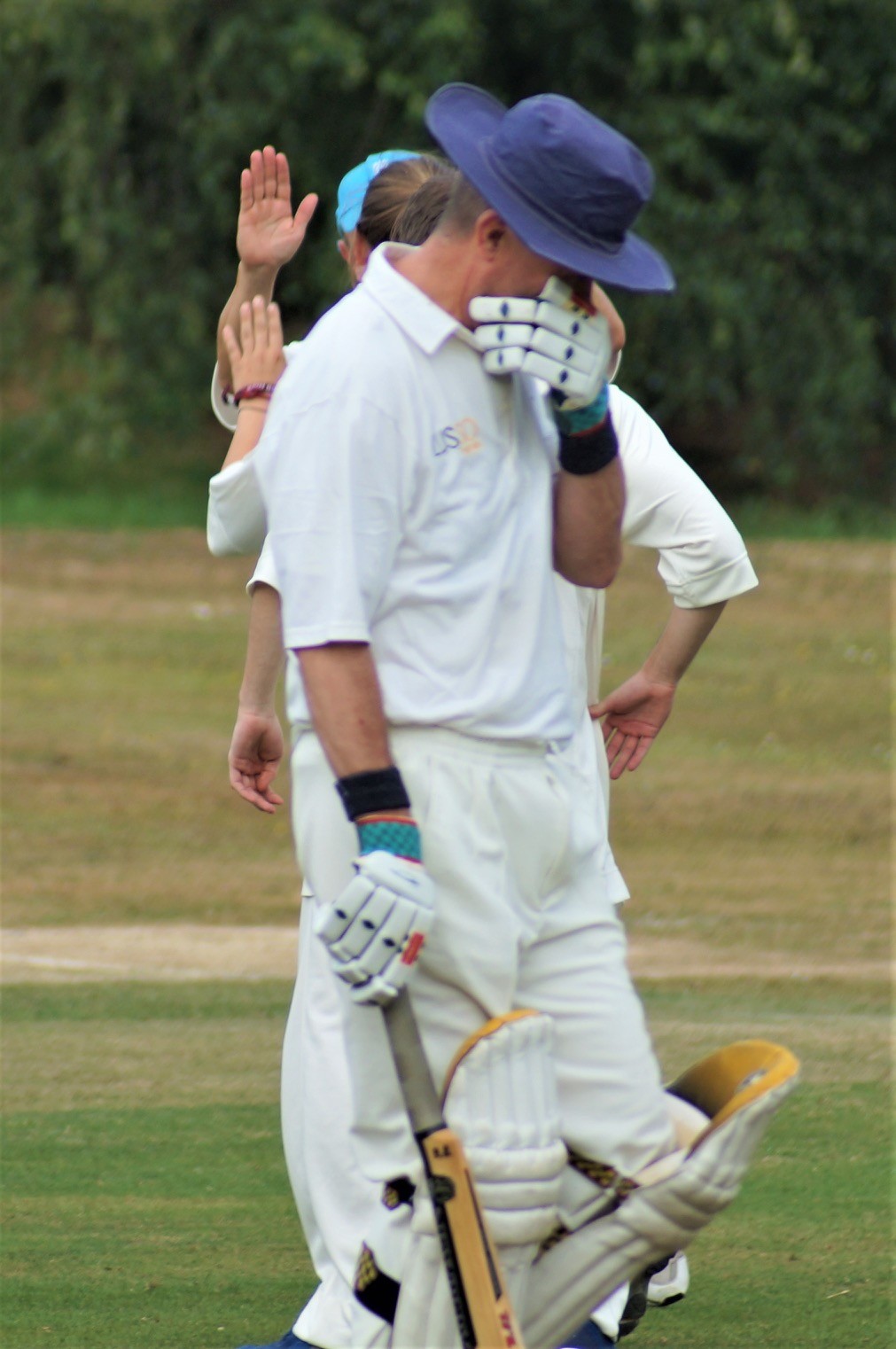 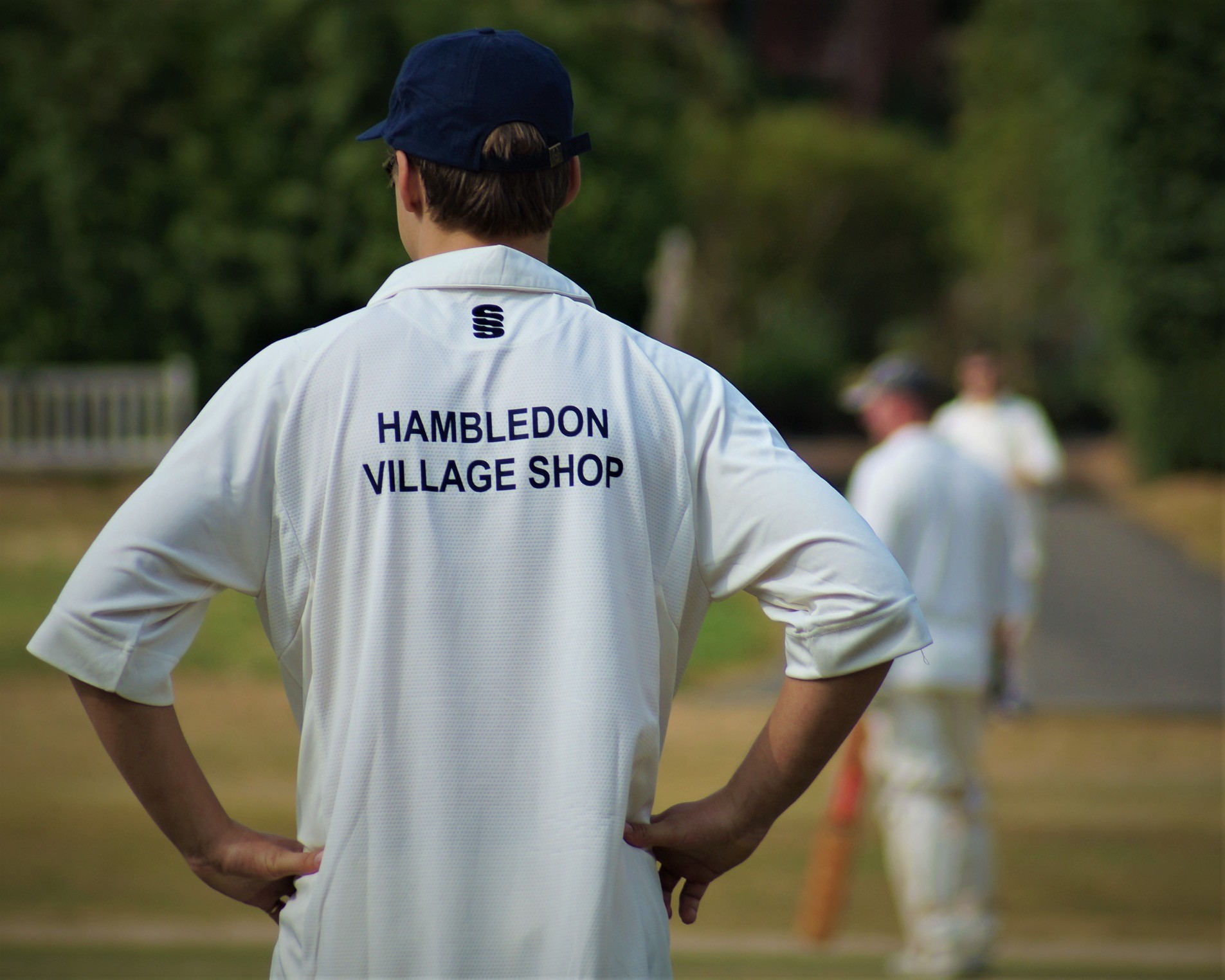 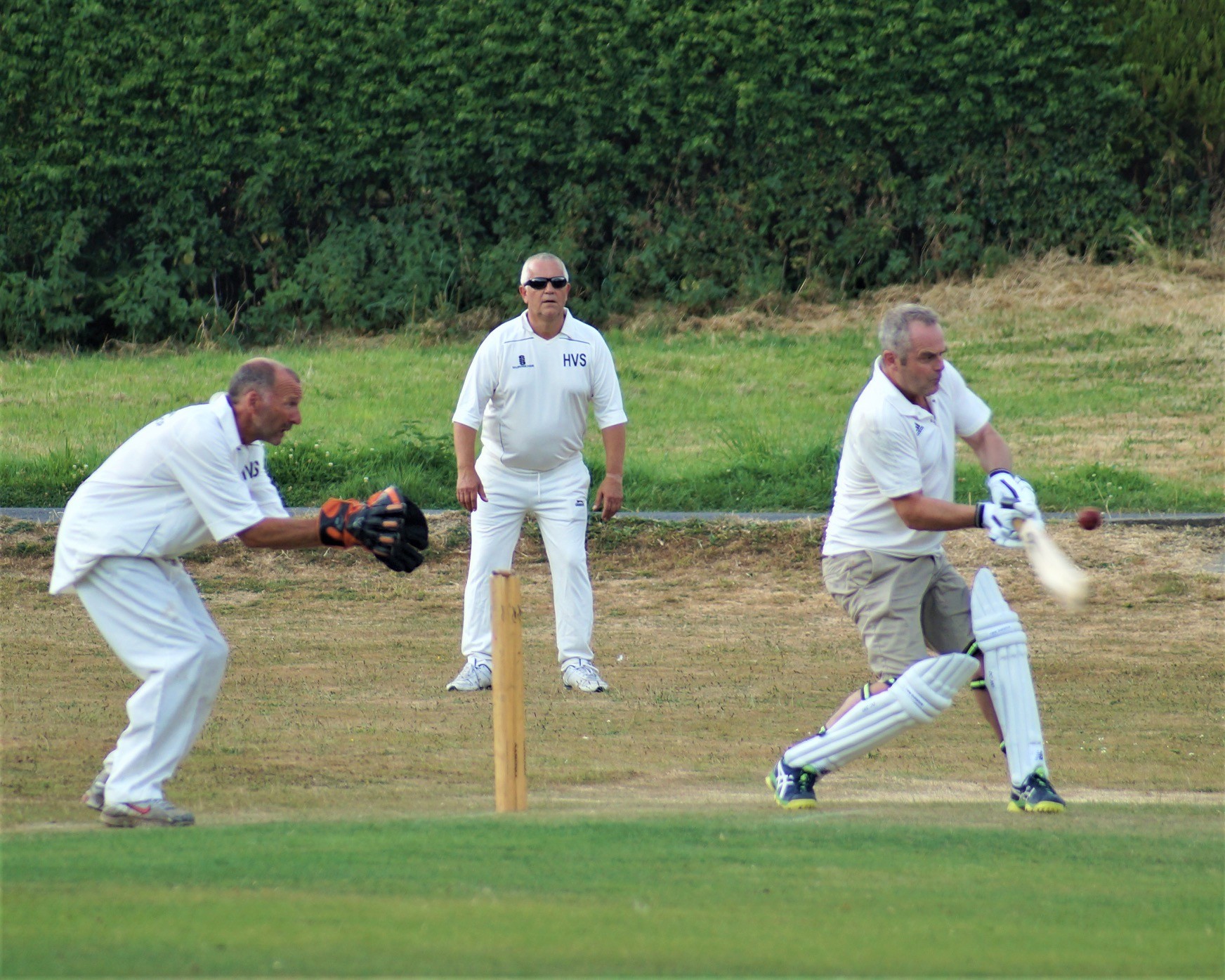 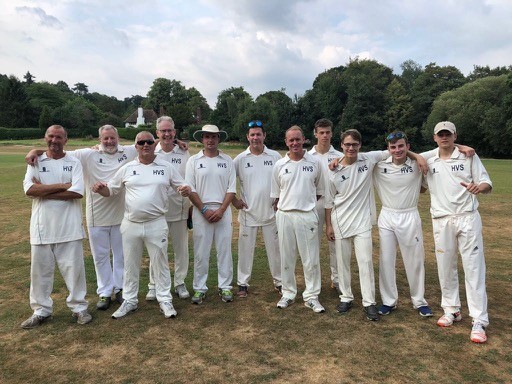 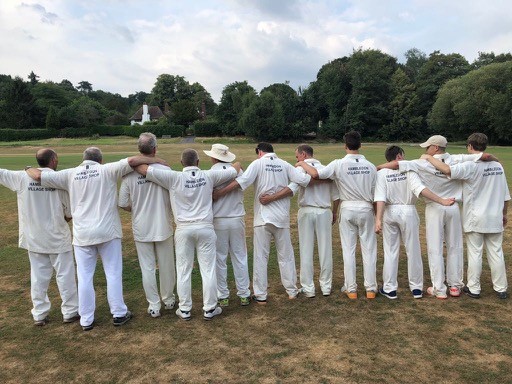 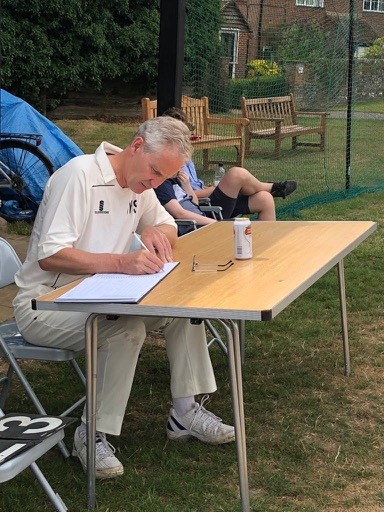 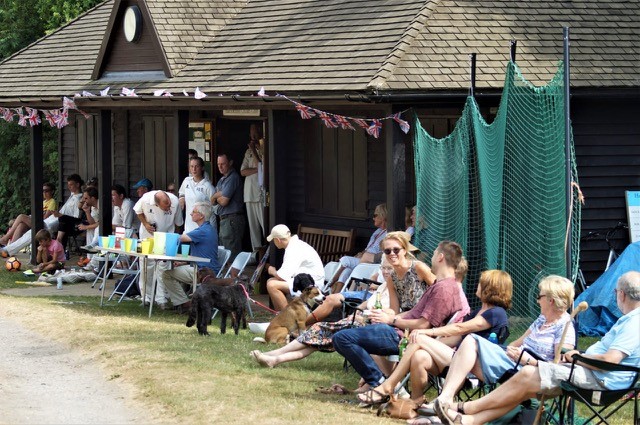 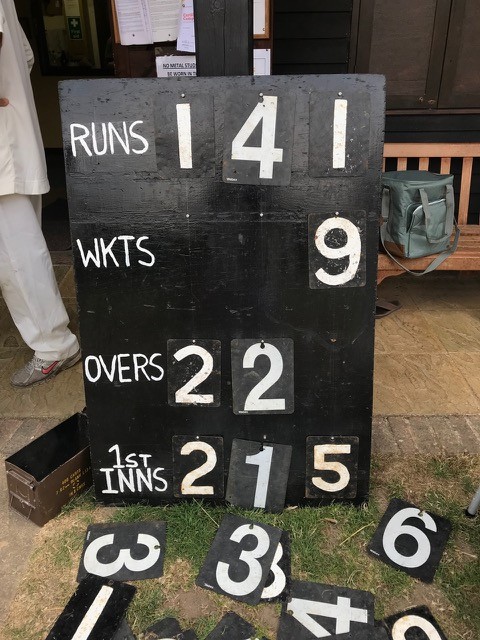