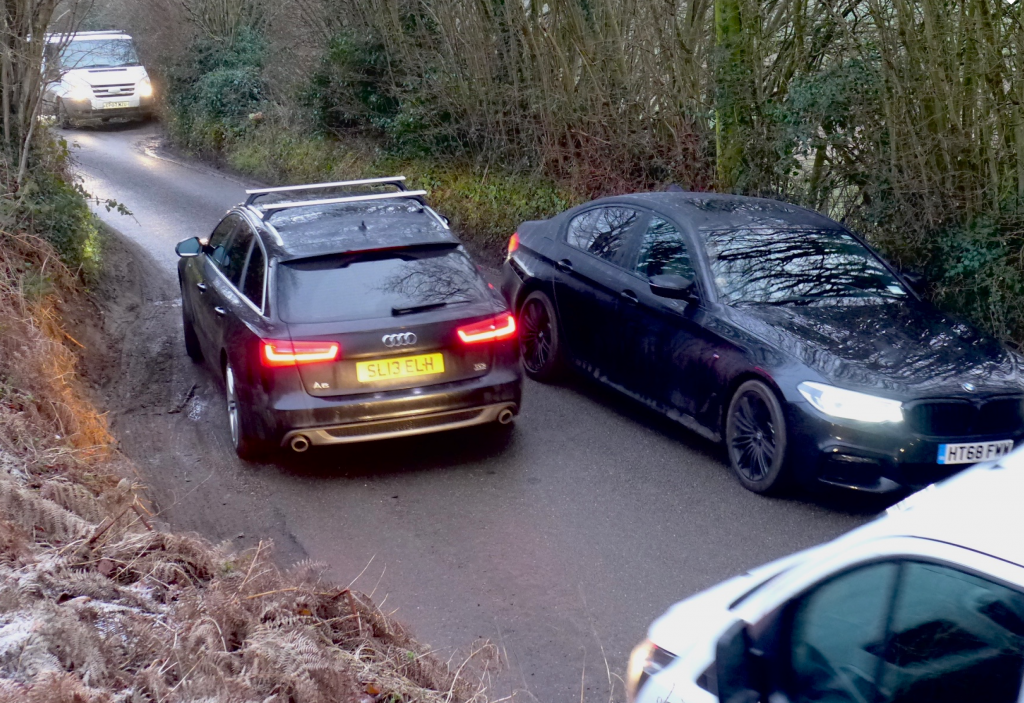 Surrey County Council has been told that its cabinet member in charge of highways must be called to address issues of safety, rat-running and heavy goods vehicles on the narrow cut-through of Salt Lane at Hydestile.

In what is a significant achievement for local resident and campaigner Paul Osborne, a joint meeting of county and Waverley Borough councillors agreed that further consideration should be given to measures to mitigate the increase in traffic along the cut-through route of Station Lane, Hydestile Crossroads, Salt Lane and Markwick Lane.

Paul had successfully petitioned to have the issue added to the agenda of the SCC Waverley Local Committee meeting held on March 22nd. He needed 30 signatures before SCC would agree. In the event he had 251, most of them Hambledon and Hydestile residents, which demonstrated the extent of concern about the east-west route linking the A3 and Milford Station with Dunsfold Park, the A281 and Cranleigh.

In a powerful video presentation, seen by committee members before the debate, Paul sought to demonstrate how a narrow, rural lane with passing places was already at beyond capacity, and the problem would only get worse with the prospect of major new housing at Dunsfold Aerodrome together with others at Milford Golf Course, Milford Hospital and in and around Cranleigh.

Paul argued that HGVs which should be on A roads were using the Salt Lane route as cut-through which, combined with a big increase in car and van use, meant that the road was badly damaged with pot holes and eroded banks, and congested with tail-backs at passing places.

He told the meeting, held at Waverley council offices, that the road has in excess of 2700 vehicles a day using it. A narrow, rural and unclassified road, with steep hills and blind bends, was never intended for this volume of traffic. Roadside signs indicating the route was “Unsuitable for HGVs” were routinely ignored and carried no legal enforcement.

He suggested a 7.5 tonne weight restriction.

In response the meeting was told by Frank Apicella, SCC area Highways Manager, that the Salt Lane route was just one of many similar routes in rural areas of the county about which concerns have been expressed.

He said that he believed many of the HGVs using the route were making local deliveries, which would exempt them. If a legally-binding 7.5 tonne weight restriction was imposed the only way to ensure that lorries were legitimately using the road would be to follow them, stop them and interrogate the driver. Police resources were already stretched and there was no realistic chance of enforcement, he said.

Paul responded by saying that the weight restriction notice would have a deterrent effect by itself and a greater emphasis must be placed on getting lorries to use A roads.

In the debate that followed every councillor who spoke said they were sympathetic to the problems raised by Paul Osborne, and several said that similar problems existed elsewhere in the county. Dennis Leigh, Waverley councillor for Milford, said: “The conditions of our roads are producing really serious tensions.”

The meeting was asked to consider a recommendation to note the views expressed but councillors felt this was not enough. It was agreed that the SCC Cabinet member for highways – Matt Furniss – be asked to attend their next meeting and that members would defer any resolutions until they had a chance to hear from him and raise the concerns about Salt Lane and other problem routes.

The webstream of the Committee Meeting can be viewed here: Video.

Paul Osborne’s initiative has been supported by Hambledon Parish Council, which is also examining measures to reduce speeding in the village. Members of the parish council attended the meeting.

The case is documented here on the campaign website.

Puzzled as to why juggernauts making local deliveries should be exempt. If a delivery is really so large as to need a massive truck it should be treated as an abnormal load.