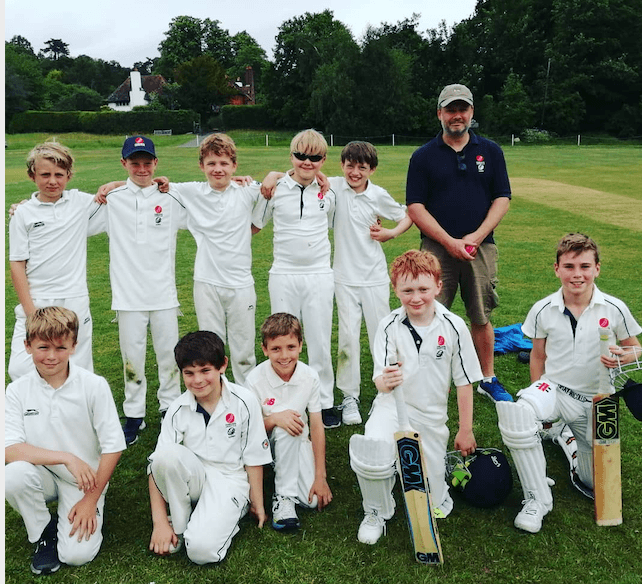 Harry L. captained the side and rather cleverly won the toss, electing to field we began the match against Elstead, a team that beat us last year. We had several 2019 newbie’s who hadn’t started a game this year, including Ray, Harry, and Lloyd but all veterans from previous campaigns at Hambledon.

The bowling was tight but the Elstead opening pair were good and put on 21. Fielding was very good again, much better than last year. We still have some issues with ball watching (umpires included!) but the team backed up behind the wicketkeeper and bowler – only requiring mild screaming from the coaches to get things moving, we gave away very few runs from over-throws or misfields.

Everyone bowled very well but a special mention for Oliver who took a brace of wickets clean bowled, a great performance, well done!

We took 7 wickets in all and even with an excellent district player coming into bat later in the innings, whom Tommy, Matt, and Tom kept tied up, Elstead set a very reachable target of 139.

Then we had the real highlight of the day, Jane Hubble’s cricket tea. I thought I had pushed the boat out by buying branded biscuits and crisps made inside the EU. Jane produced something on a different level, an excellent tea for both teams – sandwiches, biscuits, drinks et al! Delicious and very much appreciated by all. Thank you Jane!

Our usual opening pair of Jack and Tommy set to work. Elstead had an excellent wicketkeeper who played havoc throughout the innings attempting to stump anyone outside the crease (of which he managed to do several times). Tommy was caught in this way but soon learned his lesson as the openers pushed on to 25 with Jack scoring 19 of 6 balls.

The rest of the team moved the score on steadily with each pair scoring more than they lost. Some of the Elstead bowling was a bit wayward with Lloyd and Ray facing the lion share of wides. Before the last pair were in, we had sealed the victory – if we didn’t do anything silly in the last 4 overs!

Matt and Tom strode in and put the icing on the cake by scoring a further 22. Both guys played some beautiful shots but Matt Haines hitting the boundary 3 times in succession in his first over was wonderful to watch, all 3 classic shots.

We finished on 180 and 3 victories in the bag. A very good performance by everyone and a well-deserved victory. We still have improvements to make, new players to settle in and lessons to be learned but this season has started very well indeed, well done everyone!