A proposal to drive a new road through the heart of the Surrey Hills at Hambledon to relieve anticipated traffic congestion and HGV issues when Dunsfold Aerodrome is developed into housing is being fiercely opposed by Hambledon Parish Council.

The suggestion from the Guildford Society was presented at a recent meeting at Waverley council and despite Surrey Highways officers rejecting the idea, county councillors agreed to give the matter further consideration.

It envisages a new highway from Loxhill on the outskirts of Dunsfold at Hook House Lane, across the hills and fields of Burgate Farm and round the flanks of Hydon’s Ball to emerge on to the Hambledon Road at Feathercombe. It would then use Hambledon Road and Station Lane to reach a new “Milford Parkway” station and the A3

The Guildford Society, a registered charity with the stated aim of preserving and enhancing the environment of Guildford, submitted a written question to the Waverley Local Committee, which comprises members of both Surrey and Waverley councils.

In a covering letter, Alistair Smith, chairman of the society, wrote: “The link scheme we propose, some 12 kms long, is likely to be complex, expensive and controversial, as part of it would necessarily pass through some sensitive countryside and would need to be treated appropriately”.

The countryside involved can be seen in the photographs accompanying this article. 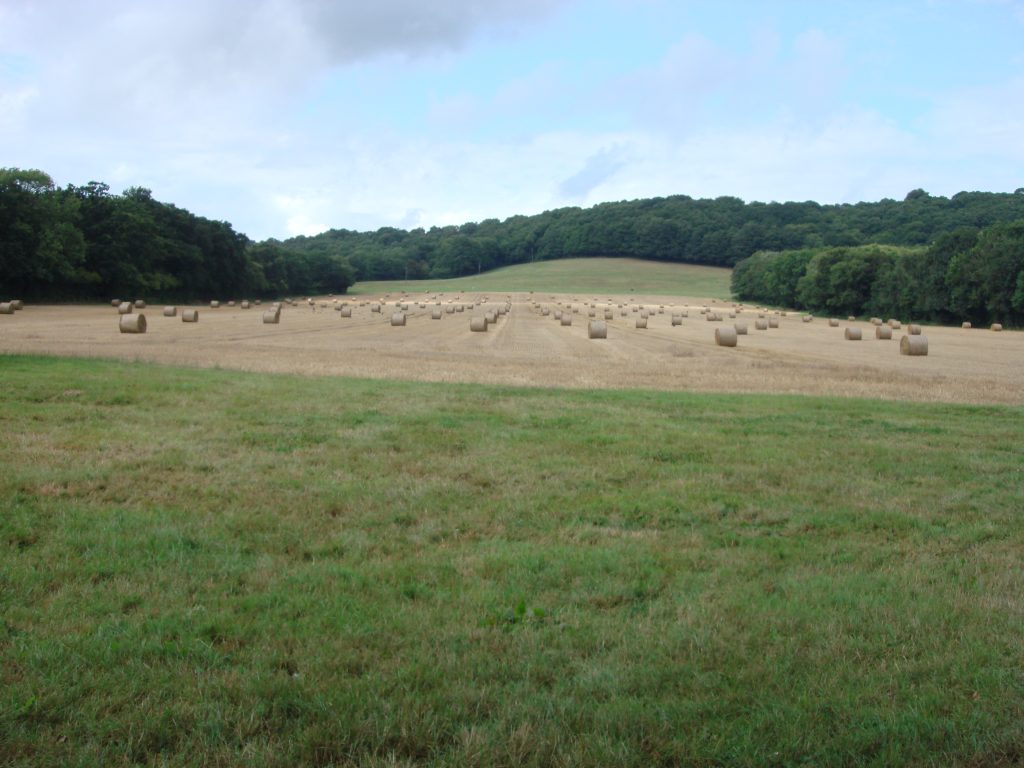 The written question asked the two authorities to consider commissioning a feasibility study into creating an east-west road linking the A281 in the Dunsfold area with the A3 at Milford.

Worryingly for the residents of Hambledon – and no doubt for lovers of the Surrey Hills Area of Outstanding Natural Beauty – Colin Kemp, deputy leader of Surrey County Council and in charge of infrastructure matters, said he was prepared to look into the idea of a feasibility study, notwithstanding a response from one of his senior planning managers that the council was not prepared to consider such a request.

The meeting was chaired by Victoria Young, a county councillor who represents Hambledon. She did not commit to a view on the matter but told members that she had sought the advice of her Conservative colleague Mr Kemp. “He is prepared to look into the possibility of what might be some sort of link road in the Dunsfold/Cranleigh area and Milford and the A3”, she told the meeting.

The Guildford Society proposal follows its concerns on the impact of traffic generated by the planned new development of 1,800 houses (rising to a potential of 3,400) on the airfield site. The only major road in the area is the A281, which is already heavily congested as it approaches Guildford through Bramley and Shalford.

Hambledon Parish Council has expressed it opposition to the idea with Cllr Young and challenged the Guildford Society over its proposal.

Although extremely alarming, it is important to keep the issue in perspective. It is only a suggestion from an un-elected civic society. SCC has not committed to holding a feasibility study, but has said it would look at the idea. It would be a major infrastructure undertaking and would be hugely expensive, to say nothing of the widespread opposition it would face from a host of conservation groups.

Victoria Young told the parish council that she has spoken again to Cllr Kemp. “He explained that he has asked officers to do a desktop exercise to look at the possibilities of such a road, and to give him a “gut” feel as to the feasibility and costs.  If it were deemed worth considering further, there would then need to be a formal feasibility study which would cost a substantial sum and I am not clear that this money is available.  They would not get to this point before early 2020.”

She added that other options for better infrastructure to Cranleigh and Dunsfold should be properly considered in tandem, and Cllr Kemp “took this point on board”. The parish council has suggested the reopening of the former Guilford to Cranleigh railway, the track bed of which still exists, should be considered. It could be a light electric tramway with a spur to Dunsfold and could exist alongside the current Downs Link footpath, would be much cheaper and far less environmentally damaging while providing an alternative route to Guildford and its main line railway station.

The Guildford Society proposal has been drawn up by Maurice Barham, secretary of its transport group. He has been contacted by Stewart Payne, on behalf of Hambledon Parish Council. From this it emerged that Mr Barham has no background in planning or highways, did not visit the location of the route he is proposing, and cannot recall if had ever visited Hambledon. He appears to have simply drawn a line across a map.

Asked why, when the bulk of his route is across countryside within the Surrey Hills AONB, he then proposes using the existing Hambledon Road and Station Lane to reach Milford Station and the A3, he said it could not go across the field “because there is a golf course there”.

It was suggested to him that he appeared to put greater emphasis on a golf course than the AONB and that in seeking to alleviate highways issues in and around Guildford he was prepared to blight a small rural village and its surrounding beautiful countryside.

Mr Barham was asked if he was prepared to withdraw the relief road proposal. He replied: “No, county councillors have said they will look at this proposal and we wait and see what happens. It is just an idea. All we are asking is for a feasibility study into the proposal and we are encouraged that councillors are to consider this.”

Mr Barham lives in Shalford, beside the A281 and he said his house suffers from traffic congestion and HGVs “rumbling past day and night”. He was asked whether it was reasonable to resolve his doorstep issue by building a road through unspoilt countryside elsewhere.

“It is unfortunate that it is an AONB and my route has avoided the wooded areas”, he said. “But the alternative is to do nothing. We have all seen the very compelling video that your resident Paul Osborne has made about the problems on Salt Lane and Markwick Lane. We are fully supportive of the idea that a solution is needed.” 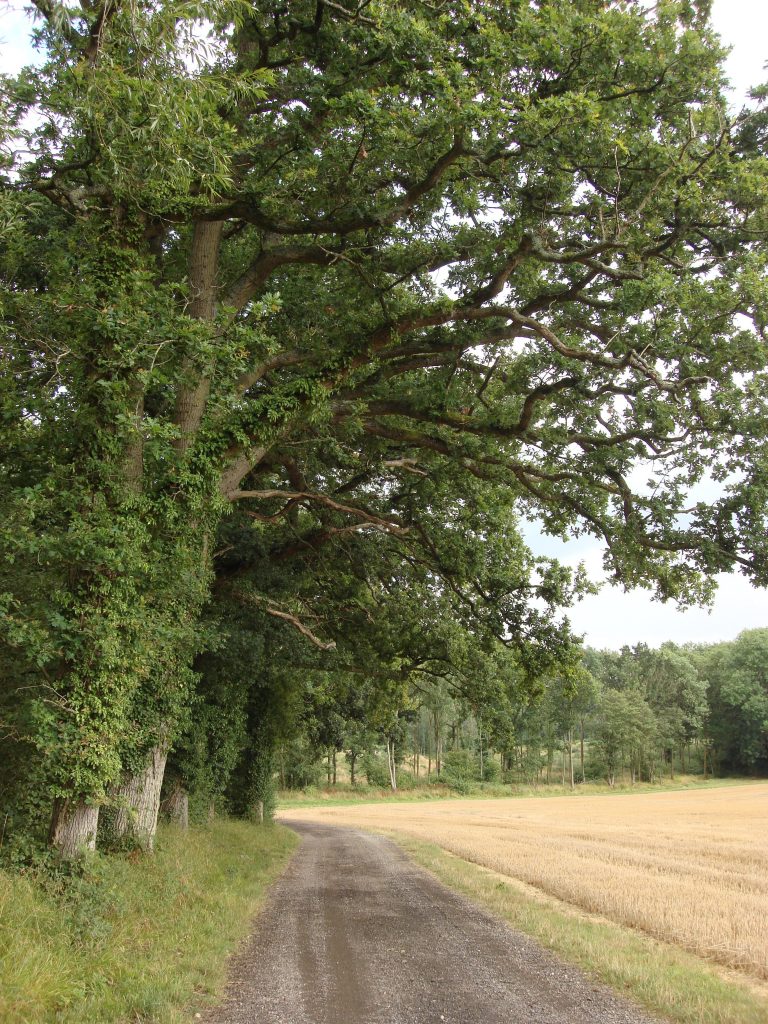 He described Milford as a “main line” station but it was pointed out that this is not the case and currently has short platforms unsuitable for 10 or 12 coach trains. He said that the station could be redeveloped. Fields beside the station could used to create a new parking area.

In submitting its proposal to the Waverley Local Committee Mr Smith, Guildford Society chairman, wrote: “Essentially our suggestion is to create a new road to link the A281 …with the A3 at Milford”. He said development at Dunsfold will “exacerbate” traffic problems and having seen Paul Osborne’s video it was clear that it would be a “desecration” to widen existing narrow lanes.

A new “Parkway” station in conjunction with the new road would provide direct access to the rail network and the A3 for Dunsfold and Cranleigh commuters as well as delivering environmental benefits to Guildford, Shalford and Bramley, he wrote. The society first proposed the idea of a relief road in 2009 but recent concerns about impact on narrow rural lanes such as Salt Lane and Markwick Lane has led to it pushing the idea forward again.

Michael Green, SCC’s transport development planning manager, said that “sustainable transport measures” are proposed as part of the Dunsfold development and that these improvements were sufficient and no new road was needed. “The construction of a substantial link road comprising 12 kms of new highway through otherwise undeveloped Surrey countryside would be at odds with the overall aim of the development.”

Nevertheless, Mr Smith said he was “delighted to learn” that Cllr Kemp “has agreed to investigate the possibility of a feasibility study on such a link.”

Although borough councillors in Shalford and Bramley were copied in to the Guildford Society proposal, no effort was made to contact Hambledon parish or borough councillors, even though the proposal is almost entirely within the parish boundary. Victoria Young, whose SCC Eastern Villages ward includes Hambledon, did not contact the parish council about the proposal until it was raised with her by Stewart Payne.

Cllr Kemp was contacted for comment but had not responded at the time of publishing this article.

Rob Fairbanks, director of the Surrey Hills AONB, said: “I think the proposal is based on the premise that the Society wants to reduce or restrict any traffic movements going through Guildford town centre.  As far as the AONB Board is concerned, such a development would cause significant harm to the AONB and the cost of its construction, including mitigation works, would surely make it unviable.”

How clever of Mr Barham to conflate Mr Osborne’s justifiable concerns regarding the potential use of Markwick Lane and Salt Lane by heavy vehicles and the former’s wish to see an east/west road link with such traffic avoiding Shalford, where he happens to live. Mr Barham has set a hare running-it is a shame that our representatives did not immediately quash this “back of a cigarette packet” solution. As part of the Dunsfold application, we were told that no new road developments were required as confirmed in this piece by Michael Green, SCC’s transport development planning manager. And yet barely… Read more »

Indeed. The Council need to be reminded that the Dunsfold planning application envisaged residents of the development cycling and taking public transport. This was always nonsense but if that were finally to be accepted to be the same some back-tracking will be needed.

What a surprise that those were involved in the Dunsfold plan (mainly Waverley and the developers) have just ‘discovered’ that the A281 Guildford Horsham road is already unfit for the amount of traffic that uses it. Perhaps they’ll now think about where all the water will come from.