The Merry Harriers has a new general manager and head chef as Jake Andreou and David Totterdell take up their appointments at Hambledon’s 16th Century pub.

They arrived in mid-November and have been warmly welcomed to the village by staff and regulars. Together they have set about introducing new menu ideas and working to expand the appeal of the accommodation while maintaining the pub as a traditional “local”.

By coincidence, both are from Stoke on Trent in Staffordshire, although they only met on being appointed to their new jobs by Peter and Lana de Savary, owners of the Merry Harriers.

Jake, 26, is already a familiar face in the bar and restaurant area, introducing himself to regular customers and getting to know the village. David, inevitably, is seen less as he leads his small team in the kitchen. But his changes to the menu have already been favourably received. 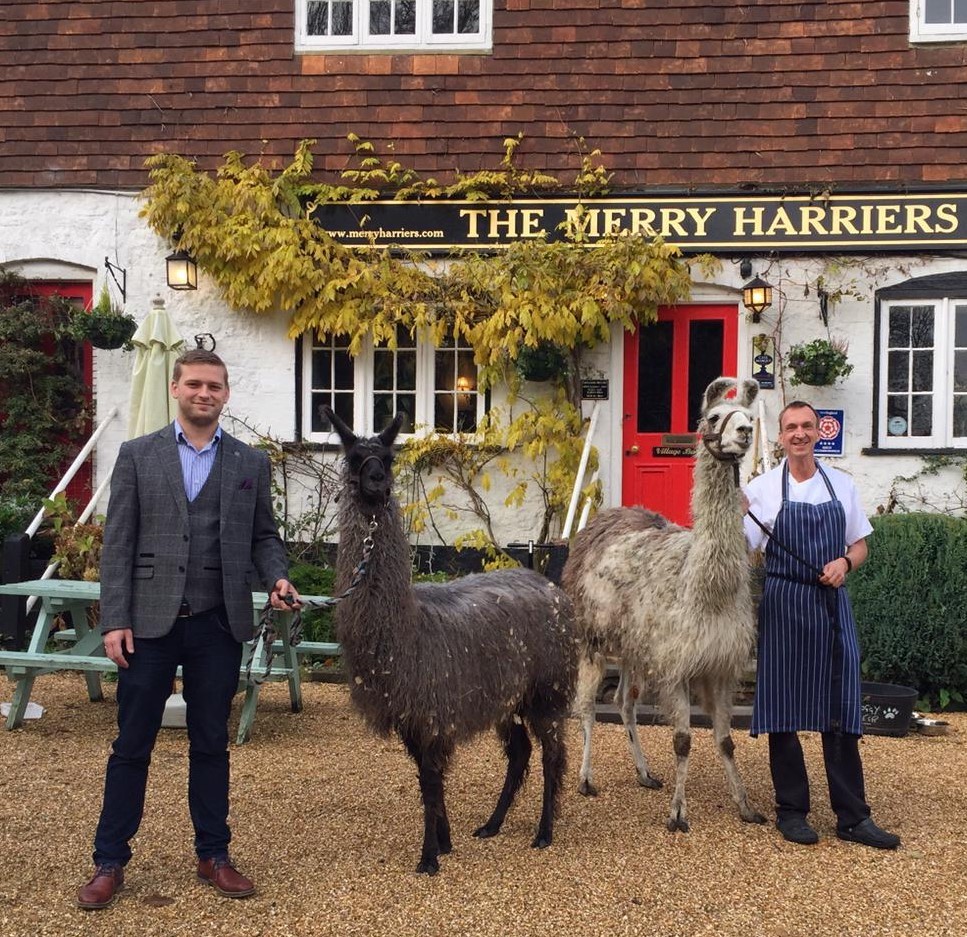 Jake, pictured left above, said: “We are working together on many aspects of the pub. As far as food is concerned, we are trying out various ideas with traditional pub food and some interesting specials, including vegetarian and vegan options. We have changed suppliers and now have daily deliveries of locally-sourced meat and vegetables.

“Our plan is to have a fairly small, quality, seasonal menu changing every few months as well as specials. We hope to have evenings set aside for locals to sample the menus and let us know what they think”.

Jake started out in the hospitality business aged 13 as a part-time pub glass washer. “I was taken by a relative to local pubs and restaurants from the age of 16 and fell in love with the whole theatre of preparing and presenting food and drink.”

He studied customer services at the De Vere Hotels group academy at the Wychwood Park Hotel near Crew, Cheshire, and impressed enough to be taken on full-time at the hotel itself, aged 17, leaving after two years as restaurant supervisor. He gained further experience at pub chain Marston’s, before being appointed to the 4-star Holiday Inn at Milton Keynes. Buckinghamshire, as food and beverage manager.

It is from there that Jake heard about the job of general manager at the Merry Harriers. “Hambledon? I had never heard of it. I was invited down to stay for the night. The village seemed like the middle of nowhere, no phone signal, couldn’t pick up any wi-fi! But I was offered the challenge of getting the pub where it needed to be, and I accepted it.”

Meanwhile, the de Savary family were also looking for a head chef and appointed David, who has worked as head chef at a number of establishments, most recently working at a hotel in Pulborough, West Sussex. He said: “I was largely turning out the same meals from a manual and there was no great creativity. I now have the opportunity to develop an interesting food offering and I am loving it.”

The pub is attracting visitors to its expanded accommodation from diverse backgrounds, but all looking for something a little different and out of the ordinary. “The Harriers, with its shepherd huts and rooms, llama trekking and rural location seems to fit the bill,” said Jake.

“Our guests like the community feel of the pub. The locals are welcoming and its doesn’t feel like something out of The League of Gentlemen! It is not Royston Vasey, and they often join in the meat draw on a Saturday afternoon or our monthly quiz.”

“I am determined the pub will remain a comfortable place for locals as well as a great place to eat, drink and stay for our visitors”.

Jake and David replaced Danielle and Sam Montgomery-Page, who departed in November for France. Customers and staff gave presentations to them both on their last weekend and regular customer Tim Coleman thanked them for their friendly approach, for maintaining the pub as a “local”, and for the opportunities they had given to young people, in the kitchen and in the bar. (See earlier news story on this website)

In a press release, the de Savary’s said: “We would like to thank Danielle and Sam Montgomery-Page for their support in managing the Merry Harriers since they took ownership, and for their central role in the success of the inn to his point. We now look forward to handing over the reins to the new team, and working closely with them to realise even further potential for the Merry Harriers.”