Many in Hambledon will wish to pay their last respects to John Tidmarsh but will be unable to attend his funeral because of the current Covid-19 lockdown restrictions.

Instead, villagers may choose to wave him off as his funeral cortege travels from St Mary’s Church, Chiddingfold, passing the turn off to Lane End, Hambledon, close to his family home at Meadow Cottage. This will take place on Tuesday March 30th.

Rosie and Jo, John’s daughters, have shared their memories of their father, a respected and popular character who contributed so much to community life in Hambledon, particularly at the village shop. 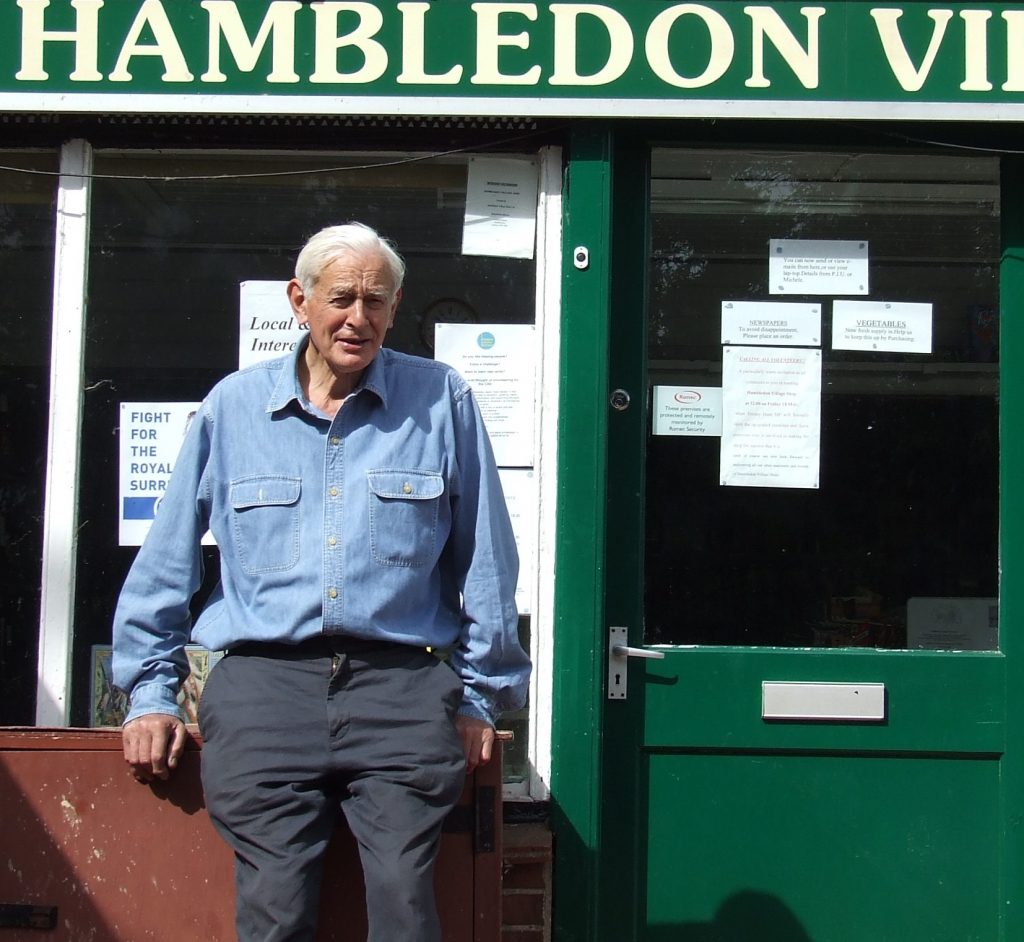 John spent much of his childhood in Chiddingfold. He played cricket there for many years and worshiped at St Mary’s, the parish church.

The hearse will leave the church at 12.45pm and travel along Petworth Road, passing Chiddingfold cricket ground, and on towards Hambledon where, at the junction with Lane End, it will turn left into New Road at approximately 12.50pm. It will then take the country lanes to Grayshott, for a service at the Heatherley Wood memorial ground.

Rosie said: “If you would like to pay your respects and wave John off, we invite you to safely position yourself somewhere on the side of the road, along the route of the hearse.”

She pointed out that the hearse will not be entering Hambledon, but can be seen as it reaches the Lane End junction with the A283. As for John’s send off, she said that those paying their respects can do so with “flag, daffodil, cricket bat or football scarf”, and that “waving and cheering is encouraged”.

Rosie and Jo expressed gratitude for the many messages of sympathy following John’s death on February 27th, after a short illness caused by cancer.

They said: “A sincere THANK YOU to those of you who have kindly written to tell us you will miss Dad. We have loved reading your observations and stories and we shall be sharing some of them at the service with family and close friends. We realise that there are many people in Hambledon who Dad would have considered close friends and we are truly sorry not to have been able to invite you to join us too but it has been quite a challenge to meet the current restrictions – especially with 7 grandchildren.”

“A Thanksgiving Service is planned in September for both Mum and Dad (Annie Tidmarsh died a year ago). If you would like to be notified of the details, please sign up on a website that we have created –www.mrandmrstids.com – and we will email you the details as soon as they can be confirmed.

As well as reading your messages, we have enjoyed looking through Dad’s school reports – they describe the boy almost exactly as letters have described the man: ‘perhaps a lack of skill, compensated by an excess of infectious enthusiasm.’

Dad was genuinely interested in people, quick to remember names and faces – and full of curiosity. When he wasn’t somewhere out and about in the village, he spent his days hedging, ditching, making bonfires and then cracking on with his jigsaw in the evening.

As many of you may know, Dad really loved sport, particularly cricket. He played for Chiddingfold from his teenage years until he was 50.

Dad was born in Cheshire but moved to Chiddingfold after the war (in 1946), when he and his twin brother were 11. The house remained his home until we moved to Hambledon in 1990.

Given it was a wrench to leave his childhood home, it is a huge credit to the village that he never looked back. Dad started his involvement in the Village Shop as the treasurer in 1993 as he approached retirement. After some years, he turned his attention to the Village Hall Committee – up a ladder, down a drain, being privy to social plans in the village – Dad had great fun.

He took a role guiding at Oakhurst Cottage for over 10 years, served 30 years for Neighbourhood Watch, loved being in charge of the car park at Vann once a year and, the crowning glory, took charge of the Bric-a-Brac stall at the fete!

As Dad said, ’85 is a decent innings’. We feel at peace with the fact that all through his life he did things his way and he appeared to take his departure at his typical break-neck pace and with his no-nonsense style.

It was a bit quick, he probably had more to say… We think, given the opportunity, he would want to thank the people of Hambledon who have either tolerated him, fallen victim to his boyish charm or simply been on his team.”

I will try to be at the roadside to wave. As a newcomer to the village (6 years) John and Annie rapidly established themselves in my consciousness. It was clear that they were an essential and integral part of the village. A delight to know. They and relatively few others are our village. It will be a challenge for those who seek their shoes.

My blessings to you

Thank you David. We hope to meet you soon as now we are the newcomers.

Thank you, it was incredibly moving on Tuesday and I imagine even Dad would have shed a tear. Thank you x

My heart broke at the news of John passing away. Who is going to correct my grammar now?

He may have known his grammar but I bet you would have beaten him in a spelling test! xx

This work is licensed under a Creative Commons Attribution-NonCommercial 4.0 International License.
wpDiscuz
6
0
Would love your thoughts, please comment.x
()
x
| Reply