As the Easter holidays approach and Coronavirus lockdown measures ease, several warnings have been issued regarding unsocial and irresponsible behaviour in and around Hambledon.

This combines with a general request from the board responsible for the Surrey Hills Area of Outstanding Beauty for people to observe countryside rules, keeping to established footpaths and bridleways and avoiding well-known sites that are likely to be congested.

A link to this advice can be followed here: https://www.surreyhills.org/visiting-the-surrey-hills-as-lockdown-eases/ Most of Hambledon is within the Surrey Hills AONB, as is much of the countryside around it.

In the village, concern has been raised about some horse riders not keeping to bridlepaths on Hambledon Common and elsewhere. Stephen Dean, who owns the common and is restoring its habitat, believes only a minority of riders are responsible for leaving established tracks and damaging common land and the natural environment.

He is also concerned that an individual is taking a child onto Hambledon and Buss’s commons to race around on a small motorbike, leaving rutted tyre tracks and causing a noise nuisance. Stephen points out that motorbikes are not permitted on common land.

An approach to the individual concerned – who is local – led to an unpleasant altercation. Police have been informed and anyone seeing this motorcyle activity is asked to report it to police.

“Some people are puzzled about common land, often assuming that ‘nobody owns it’. In fact, all commons have owners, whether the local Council, the National Trust, or a private individual.

Our Common has been owned by successive Lords of the Manor of Hambledon for many centuries. In the past certain residents (commoners) had rights to graze cattle on the Common, or to collect firewood (‘estovers’) or quarry sand. These rights have largely fallen into disuse.  Today everyone has the right to enjoy the Common for ‘air and exercise’, and horse riders to use the public bridleways (which are regulated by Surrey County Council).

In addition, some thirty years ago, the Lord of the Manor instituted a series of ‘permissive bridleways’, which are not statutory and can be changed or withdrawn.  Both types of bridle path are indicated by way-markers. Riders are not permitted on other footpaths, or to wander where they will. 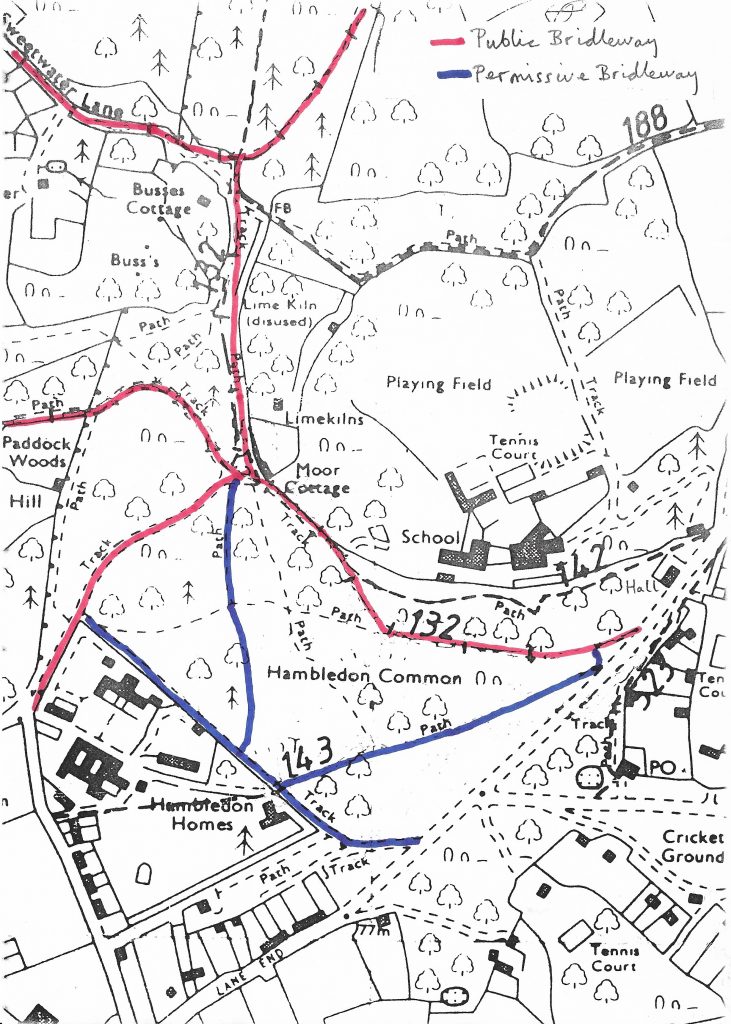 No one who walks the Common can fail to notice that horse riders do not always keep to these bridleways.

Before the Second World War the Common looked very different from today, an open landscape dominated by heather, with few trees. The nightjar made its strange churring call on summer evenings. Over the years, after a series of disastrous fires, birch, turkey oak and holly invaded the landscape, and acres of dense bracken shaded out the heather. By 1990 almost all the heather had disappeared and trees hid the lovely view towards Blackdown.

My efforts in the last thirty years have been to reverse this process. When trees and bracken are cleared from banks, and gullies reopened, it is in the interest of heathland restoration, not horse riders. The riders who stray from the bridleways, trample the heather and gallop up and down the heather banks – all unthinking – damage this habitat and set back efforts to restore the Common to its former beauty.”

Dear Stephen we all owe you a debt of gratitude in assisting our Hambledon community along with many others in keeping this a beautiful environment.
The motor cycle rider et al, I hope would take some responsibility and perhaps we can mention this to the known resident.. well done Stephen you are appreciated.

Here here. We moved to Hambledon in 1990 and I can still smell that bracken (it was a hot summer that year) and losing our unruly dog – it was really overgrown. Only today I was walking and remarking on the UNBELIEVABLE transformation – not only the whole hillside down towards Malthouse Lane, but also the areas either side of Moors Cottage and down towards Enton. We really must all do our bit to help Stephen – it has been 30 years of hard work, every day of the week in all weathers. Thank you Stephen – we all love… Read more »

This work is licensed under a Creative Commons Attribution-NonCommercial 4.0 International License.
wpDiscuz
2
0
Would love your thoughts, please comment.x
()
x
| Reply