The fate of Hambledon’s only bus service, the 503, will be decided by Surrey County Council in May and, unless the proposal to axe the route is overturned, it will cease operating in September.

However, SCC has acknowledged the strong opposition to the proposal by Hambledon Parish Council and residents and indicated that it may be prepared to meet to see if there is an alternative to outright closure. The parish has suggested that the 503 could be merged with the 523 Milford Hospital service, which is also under threat, and rerouted to take in new housing developments.

In its latest Local Transport Review SCC – faced with having to make budget cuts -has been examining rural routes in West Surrey with the aim of reducing the level of subsidy it pays to operators to keep the services running.  Under this review it proposed scrapping the 503, which runs three days a week and connects Hambledon with Milford, Godalming and Guildford.

The 503 is important to the village and its immediate neighbourhood, and especially to some of its older residents and those without cars. Starting and ending at Lane End it connects Hambledon and Hydestile with supermarkets, banks and surgeries. Most of its users have bus passes but face losing the only bus they can travel on. 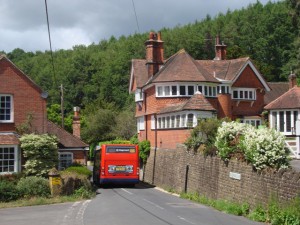 Under the review SCC is also proposing scrapping the 523, which operates twice a week to Milford Hospital from Godalming via Busbridge.  Both services are operated by Stagecoach on behalf of the County Council, using low-floor buses suitable for the elderly and infirm.

SCC has been consulting on the proposed changes to these and other services. In its submission Hambledon Parish Council urged the county to keep the 503. It also suggested that the 503 and 523 could be merged to serve the new 100-plus homes being built beside Milford Hospital, other areas of new development and be re-timetabled to make it more widely available.