Hambledon Parish Council is to hold talks with Surrey County Council and Waverley Borough Council to press for a review of the way the village bus service operates in the hope it can be made more commercially viable.

Suggestions from villagers would be welcome, either by leaving a website comment on this article or posting suggestions in the Forum section.

The 503 route, which is the only public transport service available to residents, connects the village with Milford, Godalming and Guildford and is especially important to the elderly and infirm wanting to visit shops, banks and surgeries. It is shown here in the picturesque setting of the farm buildings at the Hydestile Crossroads as its leaves the village headed for Milford. 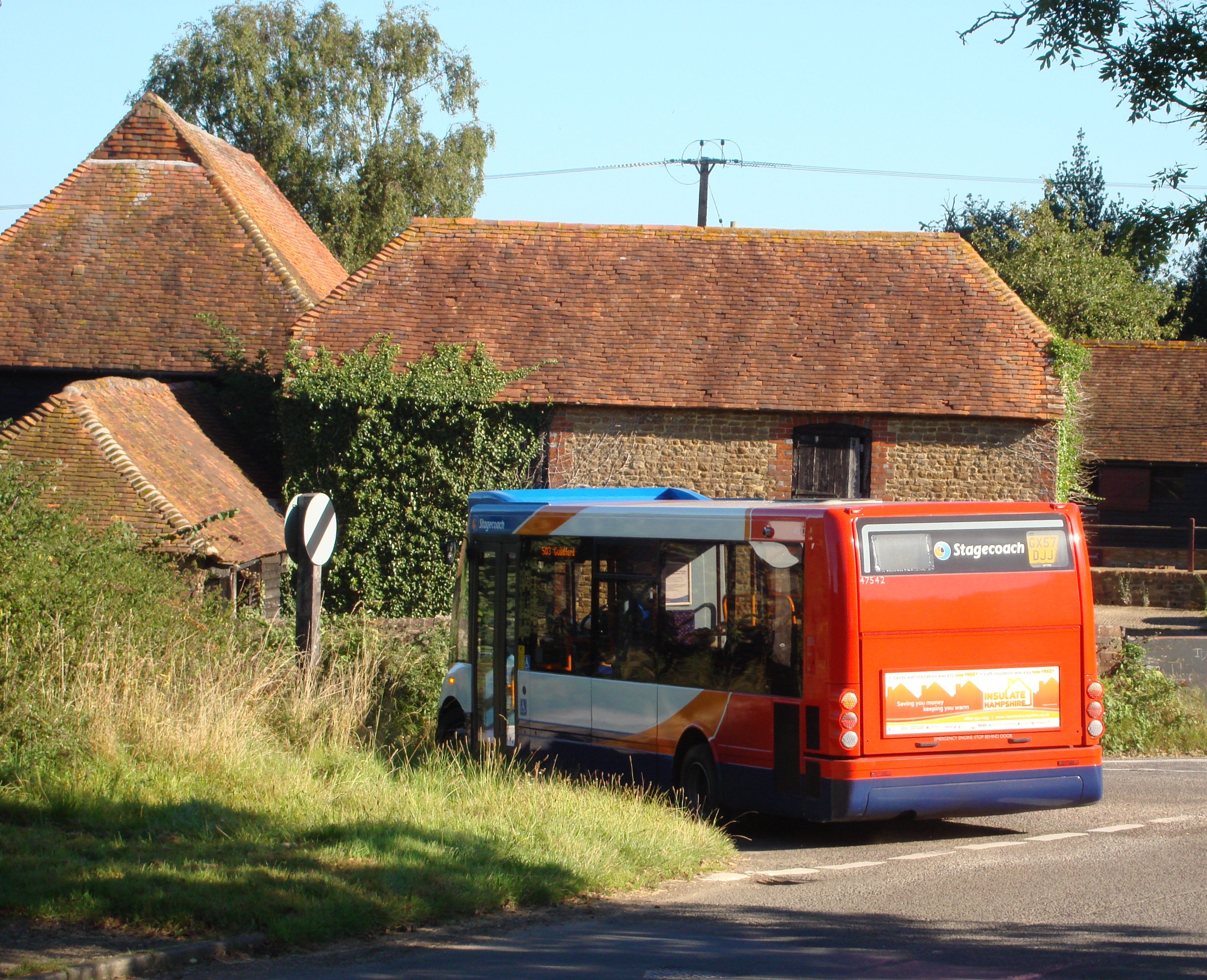 It is operated by Stagecoach but is heavily subsidised by Surrey County Council. Recently it faced the axe, only to be reprieved after the parish council and residents lobbied for it to continue.

The council is keen to see if changes can be made to increase revenue and prevent another cost-cutting exercise threatening its existence the next time SCC reviews its subsidised bus operations.

Currently the 503 operates on Mondays, Wednesdays and Fridays, twice in each direction, beginning at Lane End at 9.15 and 12.15. Although a vital service for older residents its timing and infrequency means it is of no use to school children or commuters, despite its route taking it past Milford Station and local schools.

Surrey County Council has indicated that it is prepared to discuss the route with the parish council and others and it is hoped this will happen soon.

In the meantime a new development of 100-plus homes known as Leithfield Park is nearing completion on redundant land next to Milford Hospital, just off the 503 route. As a condition of its planning permission the developers have set aside money for a Hoppa community bus service to operate on weekdays twice daily, morning and late afternoon, stopping at Milford Station, local schools, Godalming College and Godalming town centre.

However this service has yet to start, even though many homes are now occupied, and the funding is only for two years.

Hambledon and Busbridge Parish Councils have held discussions with Waverley Borough Council and Hoppa to explore the possibility that it be absorbed into an enhanced 503 service and also takes in the twice-weekly 523 from Godalming to Milford Hospital.

Another possibility is for the Hoppa service to collect commuters in Hambledon en-route from its depot near Witley Station to Leithfield Park, delivering them to Milford Station where car parking is now beyond capacity.

Discussions are at an early stage and an immediate obstacle is that money set aside for the Hoppa community mini-bus cannot be diverted to support the 503.

This year the 503 survived against the odds. It will be under threat again unless passenger numbers increase.  Yet its infrequency means that it is not an option for many villagers who might otherwise use it.

If a “new town” is built at nearby Dunsfold – as seems increasingly likely – our local lanes are going to become even more congested, especially on the Salt Lane and Vann Lane approaches to Milford and Witley Stations.

Hambledon Parish Council is determined to explore all options and suggestions from residents are welcome.

If you would like to use the 503 its current timetable is available in the parish magazine and on the website.

I live within yards of the bus stop at the Hydestile crossroads with my family including two young children. We would all really love to use the bus, but the current timings are totally impractical for us except possibly in the school holidays. Even then there isn’t really enough time to do what we need to do in town between the scheduled timetable, unless we leave very early for the holidays and then it is too long. My children are unable to travel anywhere on their own due to the distance and frightening traffic on Salt Lane and Surrounding roads.… Read more »

At The Garden House, on Hambledon Road, GU8 4DE, we have had a number of people who have looked at coming to visit, wanting to use public transport. We operate a site for educational and therapeutic use offering opportunities for people to become involved in our land-based project. We struggle to offer a public transport solution from neighbouring villages and towns, so options for these people would be very welcome.