The obelisk on the flank of Hydon’s Ball, which commemorates the lives of two brothers who died in the First World War, has been given a Grade II Listing as a structure of special interest by Historic England.

The Listing gives protection to the monument and official recognition of its architectural and historic significance.

It is one of more than 2,500 memorials to the fallen that Historic England is listing as the nation remembers the 100th anniversary of the 1914-18 Great War. More than 740,000 military personnel from the British Isles alone died in the deadly global conflict.

The obelisk commemorates Second Lieutenant Laurance Robertson, aged 36, King’s Own Scottish Borderers, who was killed in action during the Battle of the Somme on 30 July 1916, and his brother Captain Norman Robertson, 40, of 2nd Battalion, Hampshire Regiment, who died in a military hospital in Hanover on 20 June 1917.

Our photograph below shows the obelisk following the heavy snowfall in November 2010, two weeks after Remembrance Sunday. 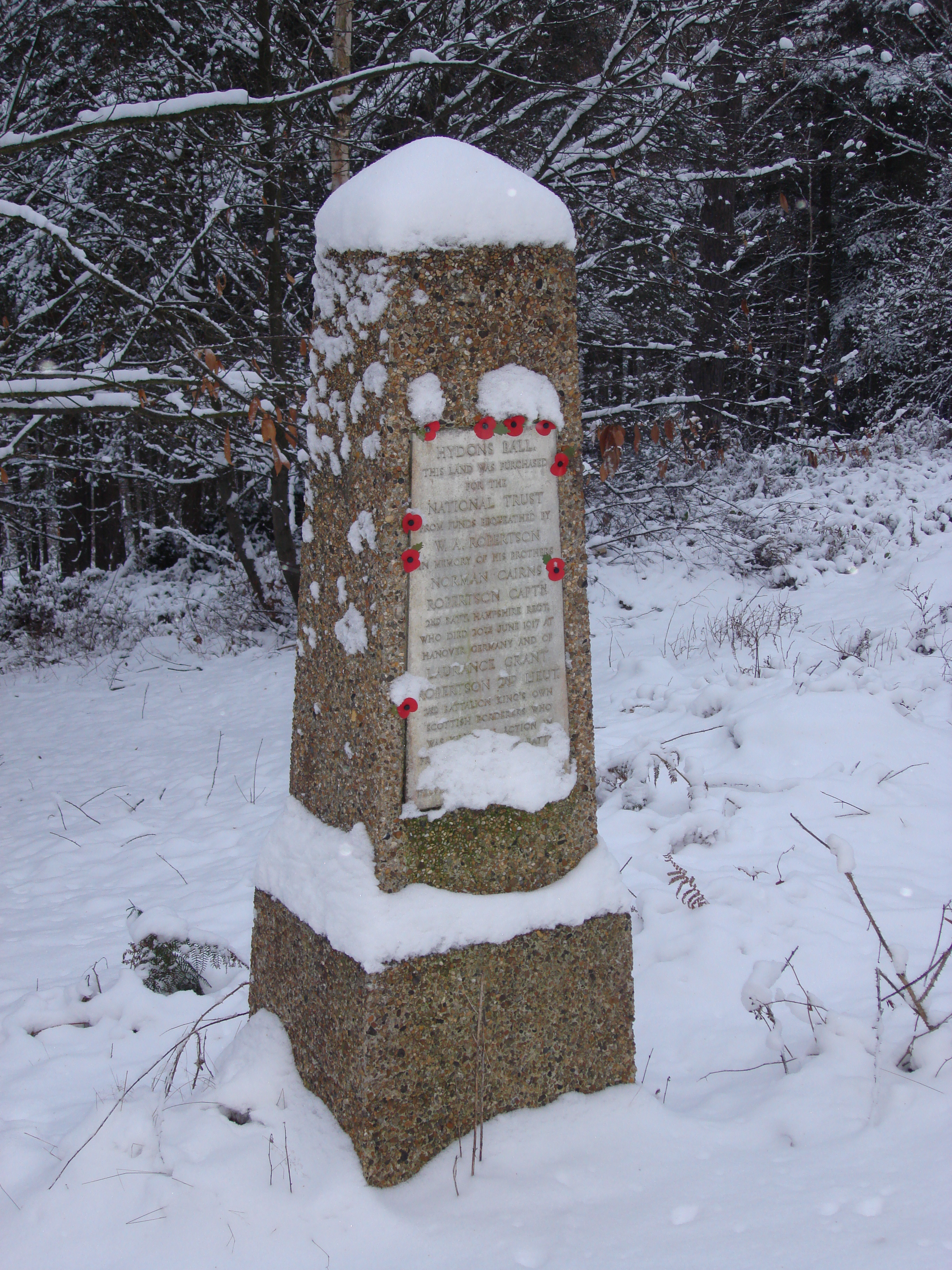 It was erected as a result of a bequest to the National Trust in the will of their eldest brother William, who died in 1937. The Trust already owned much of Hydon’s Ball and the bequest required the purchase of a small plot of land on Hydon Heath and the erection of the monument. This was completed in 1959.

The obelisk can be found beside the footpath below the summit on the south-west slope of the hill. It is easily reached from the lower end of Church Field, through the kissing gate, turning right to the little pumping station and then following the path up hill to the left. Many villagers leave poppies on the memorial around the time of Remembrance Sunday.

The obelisk was cast in aggregate concrete by Dove Brothers, London, and the plaque was made by the Royal Label Factory, Stratford on Avon, to a design by renowned craftsman of the day, Laurence Turner, Hon, ARIBA.

Historic England announced in August that it was considering making a recommendation to List the obelisk and consulted with Hambledon Parish Council and others. The Listing was confirmed this month (October 12th).

In its reasons for designation is said that the Robertson War Memorial Bequest Obelisk is of:

* Historic interest: as an eloquent witness to the tragic impact of world events on a family, and the sacrifice it made in the First World War;

* Architectural interest: a simple yet poignant obelisk, made in an unusual material and including a plaque designed by noted sculptor and modeller Laurence Turner Hon ARIBA;

* Historic association: as one of an unusual group of nine markers each indicating First World War memorial landscapes scattered across the south-east of England, resulting from a bequest to the National Trust.

The Listing can be found on the Historic England website which also has details of its other war memorial Listings. https://historicengland.org.uk

Historic England is a public body tasked with caring for protecting the country’s historic environment and is answerable to and largely funded by the Department for Culture, Media and Sport. It was formerly known as English Heritage.