As part of the resident-funded installation of broadband to Hydestile, Openreach and their contractors have been working hard this week in Home Farm Road, Busbridge, at the Crossroads and at Hydon Heath.
Technically there have been some challenges in Hambledon Road and an underground duct will need replacing – we are told there will be roadworks next week, and a possibility of emergency road closure of Hambledon Road (north of Clockbarn Lane).  This is because of the very narrow parts of Hambledon Road which prevent safe working.  The closure will be short notice and hopefully for a short time.   We have leveraged our good relationship with Surrey CC Highways to expedite matters and have been negotiating to reduce the inconvenience but safety trumps most arguments.  So please be understanding if you should encounter a Road Closed sign – it will be for a very valid reason.

Many thanks to everyone who contributed to Hambledon’s superfast broadband survey and to Jon Petersen for analysing the results. For those of you who are interested, they can be found at http://www.hambledonsurrey.co.uk/superfastsurvey/. For what happens next, read on.

Peter Howell-Davies, the Hambledon Parish Clerk and Tim Forrest (representing Chiddingfold Parish Council) have met Peter Martin (Deputy Leader, Surrey County Council) and members of his Superfast Surrey team to discuss progress to date and the problems facing Hambledon and Chiddingfold. BT claim that 96 per cent of Surrey premises can now access speeds of at least 15 mbps but this is not borne out in practice. It takes no account of variations as between urban and rural areas – for example, the recent Hambledon survey of premises which get their broadband via Cabinet 6 shows that the superfast guarantee applies to only 61 per cent of them. Data issued by BT seem to bear little relation to what is happening on the ground as revealed by the actual experience of individual users, and might not therefore be the best basis from which to determine who should benefit from further Surrey Superfast intervention or BT up-grades. The results of the Hambledon survey are therefore being passed on to Superfast Surrey.

Once data produced by BT (and, we hope, others such as Hambledon Parish Council) has been analysed, intervention work to make good shortfalls in coverage has to be approved by the EU. Only when this has been done can Superfast Surrey and BT move on to recommending which premises should benefit from intervention. Proposals to this end then have to be submitted to one month’s public consultation before they can be signed off.

Whatever intervention package is proposed, it will have to show that it represents value for money and fairness. The latter criterion could prove particularly difficult in the case of what are currently estimated to be up to 20,000 disenfranchised rural premises across the county, given their location and, in some cases, the distances between them. Intervention may also be required in some urban areas.

END_OF_DOCUMENT_TOKEN_TO_BE_REPLACED

Superfast broadband is being rolled out across the country, primarily by BT Openreach but in Hambledon’s case assisted by government via Surrey County Council. Superfast, with its new fibre optic cabling to roadside cabinets, enables far greater broadband internet speeds for those residents that take up the superfast fibre service.

Superfast is becoming important to many residents. As more devices such as smartphones, tablets, computers and televisions connect to the internet, the speed of the line is critical. In addition, lack of superfast broadband is impacting house prices as buyers are increasingly checking broadband speeds before buying properties.

There is good news for those of us on the Wormley (01428) exchange who live within about 1.8kms of BT’s cabinet 6 (at the A283/Lane End crossroads). Those Hambledon residents have a choice to sign up for superfast broadband today – simply contact your internet service provider to upgrade immediately. The monthly cost is about the same as the older service. BUT there are a number of villagers on the 01428 exchange who are too far away from the cabinet to be able to receive superfast.

The Parish Council is therefore asking all villagers to complete the following “Expression of Interest” form so that it can quantify those who already can – but in particular those who currently cannot – benefit from superfast. This information will assist it in lobbying BT and Surrey County Council which is shortly going to carry out a review to ascertain how to connect the “hard-to-reach” properties and enable all villagers to receive superfast.

Responding to the “Expression of Interest” does not mean that you have to take up the service. It puts no obligation on anyone but it could help determine future needs and benefit many villagers.

In 2012 Surrey County Council awarded a contract to BT to ensure a superfast broadband service to all Surrey residents and businesses.  Those living adjacent to the Hydestile Crossroads have already discovered that there are limits to the coverage;  but it was hoped that the up-grading of the BT cabinet at the A283/Lane End Crossroads at the end of 2013 would enable everyone with an 01428 telephone number to connect to superfast.

Yet again this is not delivering in practice and a group of concerned residents is therefore trying to create a picture of where the service drops off.

To enable the group to put pressure on Superfast Surrey to install another cabinet to serve those on the edges of the village (excluding Hydestile/Feathercombe Lane which are being dealt with by a separate campaign) data is needed from as many residents as possible to create a picture of available speeds.  In theory, those living within 2 km. of the Lane End cabinet should be able to access superfast but not all of them can and those living outside that radius almost certainly cannot.

Some villagers will have already received an e-mail from Louise Rhodes asking them to carry out speed tests.  If you have not heard from her, do please get in touch (louiseerhodes@aol.com) so that she can let you know how to do the tests.  The more information she receives, the more likely it is that Hambledon will get good superfast coverage – and remember, even if you don’t want superfast, your successors certainly will!

Superfast broadband should be covering all of Surrey by now – that was the ambition of Surrey County Council back in 2014 – with promises of 99.7% being able to get 15Mbps or above.    That promise had a caveat that wasn’t mentioned by Surrey Council… that they aim to enable only cabinets –  not all residents‘ homes.  Those living more than 2km from a cabinet won’t be getting Superfast. That leaves large numbers of residents of Surrey discovering that they can’t get Superfast broadband and there is no plan for them to be enabled in the immediate future.  In our area there are homes to the East (Vann) and North of Hambledon (Merry Harriers area) that are beyond 2km from the cabinet on the Petworth Road – Superfast Surrey (Surrey County Council) say they are reviewing this (see letter below).  Areas of Milford are also excluded.

Residents of Feathercombe, Hydestile and Hydon Heath are also too far from their cabinets and specifically excluded from Surrey CC intervention.  Those residents have clubbed together to pay Openreach a substantial amount to install new cabinets to bring the promised Superfast to those hamlets… in Spring 2016.  Their self-funded superfast project website is here: www.GU8Superfast.co.uk

So the Surrey CC dream is not quite reality.  There is a faint glimmer of hope for those left behind. Surrey County Council have announced their OMR (Open Market Review) – a plan to see who is left behind without Superfast capability.   One could ask how they commissioned many millions of pounds worth of broadband expenditure without knowing the scope of their intervention.

In response to one of our determined residents, Superfast Surrey sent this letter below. That resident also urges everyone to spend 30 seconds filling in the form to tell Openreach that they haven’t got Superfast capability: http://www.superfast-openreach.co.uk/faq/contact-us-form.aspx

Surrey County Council has now finished the main phase of its Superfast Surrey Broadband programme to bring fibre broadband to those areas in the county not included in commercial roll outs.

In December 2014 it was decided that before any further decisions could be made with regards to the outcome of slow speeds review, the Superfast Surrey team had to focus on the completion of the main phase of the contract and identify options for using any remaining funds to enable a decision to be made on the future scope of the programme.

Options were developed that not only acknowledged Openreach’s analysis of premises with slow speeds in the Superfast Surrey deployment area but also took into account feedback from residents and businesses in the commercial rollout area that were not covered by the fibre network or who were on slow speeds.

END_OF_DOCUMENT_TOKEN_TO_BE_REPLACED 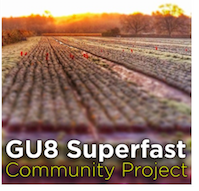 The GU8 Community Superfast Project has now launched a website to keep residents updated on developments of the broadband project. www.GU8Superfast.co.uk

Updates to the website will chart the progress of Openreach in the privately funded project to build two new fibre broadband cabinets at Hydestile and Hydon Heath. We’ll have some news on Openreach’s next steps in the near future.

The campaign team has also produced a number of viral videos:

Following our Campaign in February, Openreach reversed their decision not to upgrade the street cabinet no.26 next to Milford Station.  This cabinet went live last month and is now Fibre enabled.   Residents that suffered speeds of less than 3MBps are now enjoying real speeds of upto 70MBps.    The campaign success was undoubtedly achieved because of the strong resident support that we received, with over 90% of the 140 Enton/Rake Lane area households and businesses who will now benefit having signed up to our campaign.  Community power does work. We are thankful too for support from Peter Martin, Deputy Leader of Surrey County Council.

Phase 2 of the campaign

END_OF_DOCUMENT_TOKEN_TO_BE_REPLACED

Residents with phone: Wormley 01428 …
A number of residents of North Hambledon on the Wormley exchange have contacted me – they should be able to get superfast broadband Infinity now that Wormley upgrade to fibre is complete, as promised by Superfast Surrey (Surrey CC). However residents are gradually discovering, one by one, that they won’t get super fast broadband at all.  This is mainly for people 1.5km beyond cabinet 6 on the Petworth Road on the edge of Hambledon.  This means anyone near the Merry Harriers or North of there, or outlying areas such as Vann will not ever get super fast.

My message to residents in such a situation is to contact me Email me  and I’ll happily put you in contact with others in similar position.  My advice is also to contact the Superfast Surrey Team and ask in strong terms: “where’s my Superfast? – you promised 99.7% of Surrey would be covered?”   The person to contact is the Senior Digital Officer Lucie Glenday.  She will delegate but in my experience all her team are not empowered to answer questions other than the FAQ on their website – which don’t tell us anything new.  They say there is a review going on, but one could ask why they did not anticipate so many people were not covered by their Superfast plans that requires them to have an additional review. (we calculate over 2000 in SE Godalming alone). Their website also says they plan to develop alternative solutions for the excluded residents.   I have yet to get anything tangible from them to qualify exactly what Superfast Surrey consider as an alternative.  As of July, they have no alternative solution.
Contact Surrey CC:    lucie.glenday@surreycc.gov.uk