A chance encounter has led to the emergence of a classic postcard view of Hambledon’s village shop taken by the camera of the proprietor who lived there from the late 1960s.

The encounter was with Alison Heath who, with her twin brother Duncan, spent her childhood at Cricket Green Stores, which was run by her parents Geoff and Margaret Heath between 1968 and 1982.

Alison, now 55, recalls growing up in Hambledon with great fondness. Her home was what was then called Duck Cottage, now Pendle Cottage, and her parents were the last to both live in the house and run the adjoining shop and Post Office.

The shop featured on a postcard, one of a series entitled “Scenes of Interest and Beauty in and around Hambledon, in Surrey”. The reverse of the card states: “Real photograph. Supplied by G.A.M Heath, Cricket Green Stores and Post Office, Hambledon”. 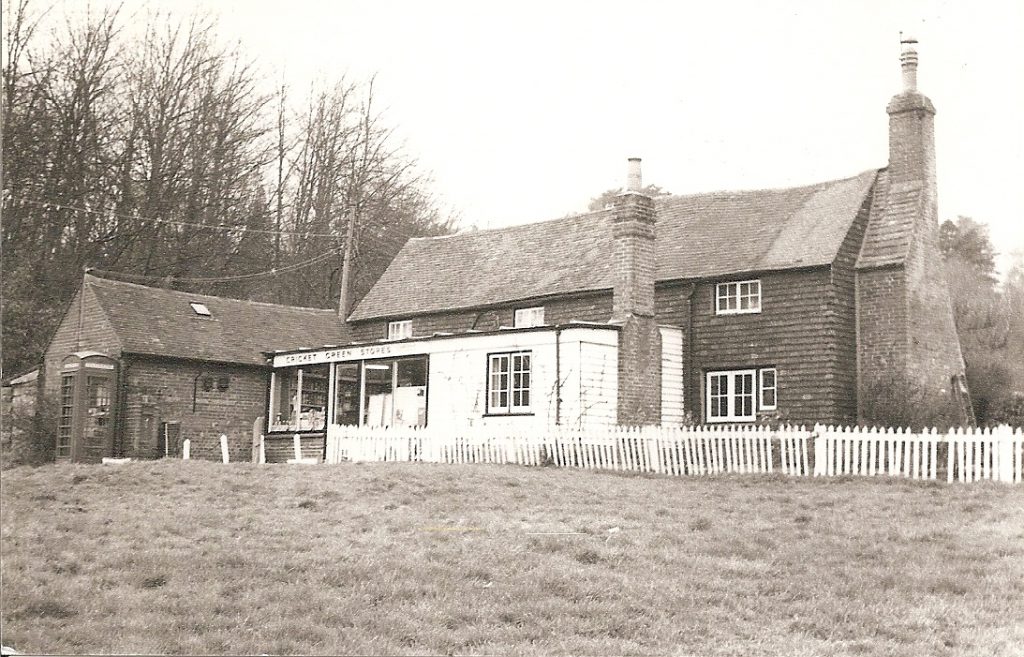 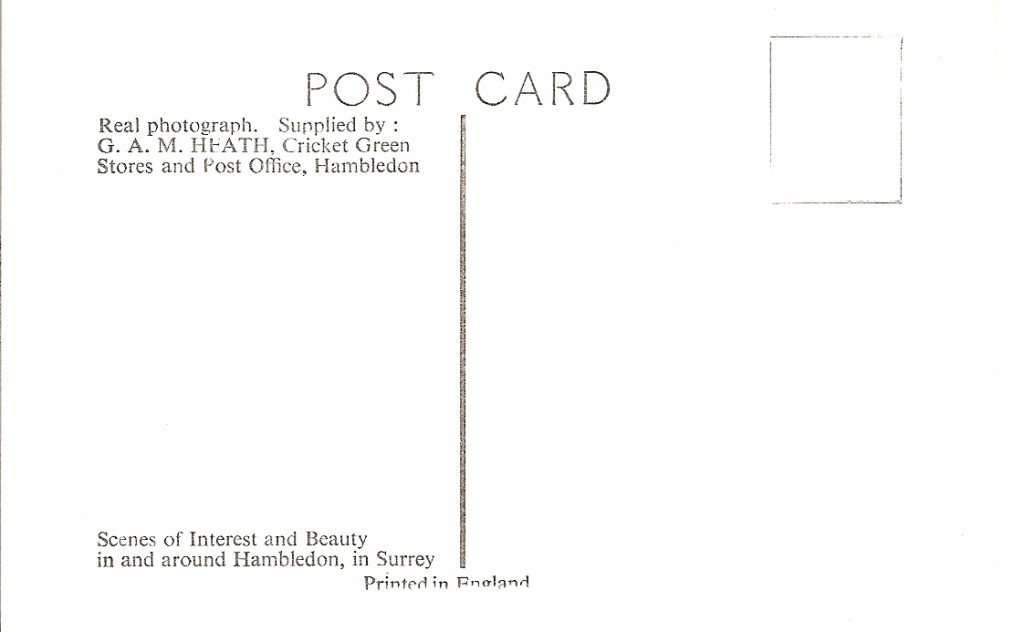 Alison’s mother died in 1987 from a brain aneurysm but her father is still alive, in his eighties, remarried and living in the New Forest.

Here Alison recalls her life growing up in Hambledon:

“My parents met in London. My mother, originally from Northumberland, was a PA and my father worked as a chemist for a paint manufacturer. They lived in Chessington but wanted to move to the countryside and a change of careers and looked at a number of village shops before settling on Hambledon. They bought it from the Ainsworths.”

Alison and Duncan were five when they moved as a family to Hambledon. They did not go to the village school and each day their mother drove them to Burn Leigh, a private school in Godalming, before returning to help her husband in the shop and behind the Post Office counter. They were helped by Win Pritchard, who was employed as an assistant.

“My dad trained to be the Sub Post Master. Mrs Pritchard was already working at the shop when we arrived”.

“Because we did not go to school in the village, we did not have a great circle of friends living locally. Our best friend in Hambledon was Sue Booker, daughter of June Booker who lived across the Cricket Green from us, and Patrick Williams, whose parents Ray and Beryl lived at Bermonde and would go on to take over the shop from my parents.”

“Looking back there was not a great deal to do in the village in terms of activities, but I do recall Bonfire Night parties on the grass on the edge of the Cricket Green near to where the Booker family lived.”

“I remember my parents being very busy at the shop. It was a bit run down when they took it over and they worked hard to build trade up. The shop was busy in those days and there was often a queue to use the phone kiosk outside.”

“When the village won a “Best Kept” award the plaque was placed on the wall outside the shop for everyone to see.”

“The shop was open on weekdays from 9am to 5.30pm and we closed for an hour at lunchtime. Wednesday was early closing when we shut at 1pm. We didn’t open on Sunday and I do not think we sold newspapers. But the milkman called every day.”

“My brother and I sometimes helped out by working behind the counter, filling shelves or sweeping the floors.”

“I have very happy memories of our time in Hambledon and we loved our home, our garden and our dog Honey. She was a cross between a Corgi and an Alsatian and I think we got her from the Baldry family who lived in the house immediately behind Duck Cottage (Chart Cottage). Duncan was a friend of their son Rupert.”

“It was a good name for the cottage because the ducks from the village pond would waddle across to our garden to be fed.”

“I remember that we were burgled twice. The first time I would have been aged about 10. It happened at night. We did hear the dog barking but did not realise that anything was wrong. The burglars broke in through the old garage beside the cottage and got in to the stock room.”

“They took the safe which was later found in a ditch. They took money but left stamps and Postal Orders.”

“The second theft was in daylight. A man entered the shop, ran around the counter, and grabbed the drawer from the till”.

Towards the end of their school days, as they prepared to leave home for university, their parents decided it was a good time for a change.

“I think they were struggling a bit and wanted to move on to something different”, said Alison. They, quite literally, lived above the shop, and were the last to do so.

“We were friendly with the Williams’s and Ray and Beryl bought the shop business and Ray ran it with their son Patrick. Joan and Cedric Hardy lived behind the shop up the footpath (Mervil Cottage)and they decided to buy our house.”

Geoff and Margaret left Hambledon in 1982 and moved to Wiltshire where Geoff took a job with the Navy, Army and Air Forces Institutes (NAAFI) managing shops on Army bases on Salisbury Plain. “Mum sadly died in 1987 and later dad remarried a lady called Joan. My brother and I went to university and since then I have worked in publishing and as a teacher. Duncan worked in conservation and is now a partner in a publishing house in Cambridge. Neither of us have children.”

In Hambledon, life was changing, as it was in villages up and down the country. And village shops were closing at an alarming rate.

Ray Williams continued to live at Bermonde while running the shop, and remarried to Pat after the death if his wife. Joan and Cedric renamed Duck Cottage to Pendle Cottage. After Cedric’s death Joan remained at the cottage.

Supermarkets were opening in increasing numbers. Most people had phones in their homes and there was no longer a queue for the telephone kiosk. Village schools were under threat. Car ownership increased, often with two cars in a family. This led to a decline in rural bus services.

Mechanisation at local farms removed the need for farm workers and Hambledon, once very-much a farming community, became a place where people lived, but few worked there.

In the years that followed the departure of the Heaths, Hambledon school closed and the Aldershot and District Bus Company ceased operating the regular 47 bus through the village. Finally, in 1990, Cricket Green Stores closed.

Of course, the story does not end there. Much that Alison remembers of an idyllic childhood remains. Louis de Bernieres, the author who grew up in Hambledon, wrote a book about his time in the village called Notwithstanding, believing he was chronicling a dying way of life.

However, when interviewed for the Hambledon Village Website, he concluded that Hambledon had “withstood”.

The shop reopened in 1992 as a community venture, staffed partly by volunteers. A Village Trust was set up and it acquired Pendle Cottage and the shop premises to secure its future. Following a village initiative, the school reopened as a nursery run by a charitable trust.

Elsewhere the village cricket and football teams thrive, the church and village hall are still at the centre of village life as is the Merry Harriers pub.