In 1922 the area to the east of the KGV was used for market gardening upto the current forestline. In the early 40’s this area was allocated for a new emergency hospital.  Originally known as the Third Australian (Servicemen’s’) General Hospital, the wooden hutted complex was greatly expanded in 1941 (360 beds) for the evacuation of patients and staff of St. Thomas’ Hospital Lambeth after extensive bomb damage in London. 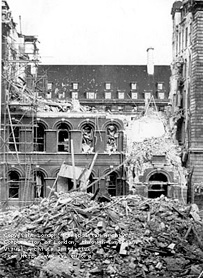 Lambeth block A bomb damage with County Hall in background

Their medical school was also evacuated, sharing accommodation at Charterhouse School and The Manor House near Charterhouse, Applegarth Godalming and Sunnydown Hogs Back. The site provided safe accommodation for all types of patient whilst the war continued. (Hydestile was hit by one bomb close to the crossroads on 19th December 1940).

The site was strictly separated from the adjacent KGV by a chainlink fence. The huts lasted well beyond their intended lifespan and many were used for a variety of roles including operating theatre, chapel, children’s ward, engineering workshops etc. The brick buildings included pharmacy, path lab and staff canteen. The Nissen hut casualty department was demolished in the 1970’s.

St. Thomas’ retained the Hydestile complex after the war even after returning to London but finally left the site in 1968. The site is now levelled, although the old entrance remains with remnants of signs on the bank. 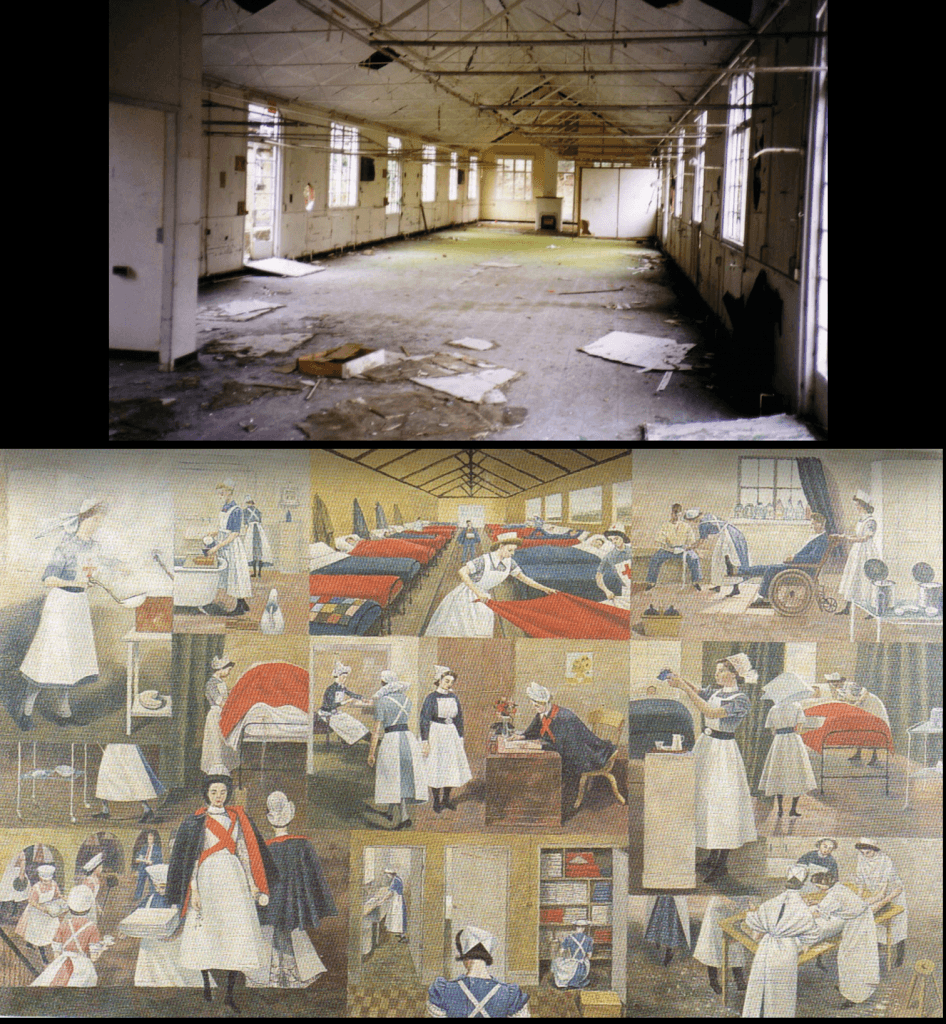 Gallery of images from archive: 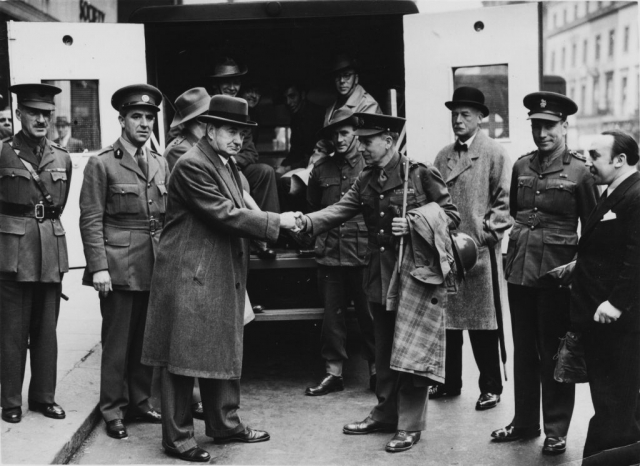 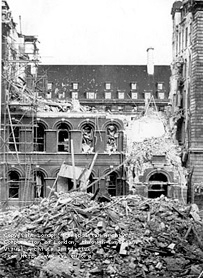 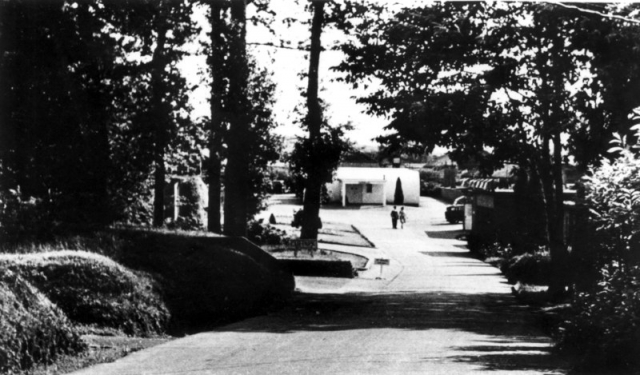 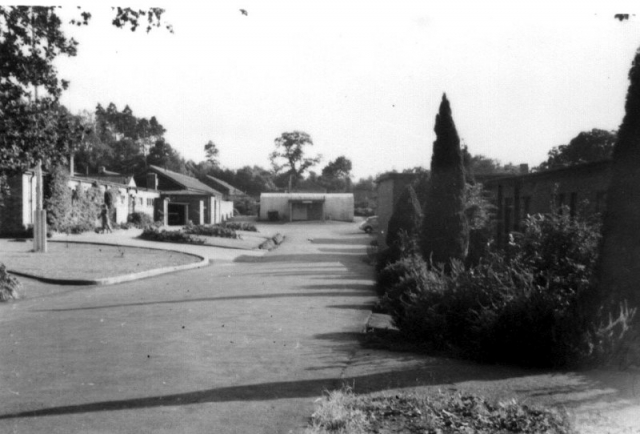 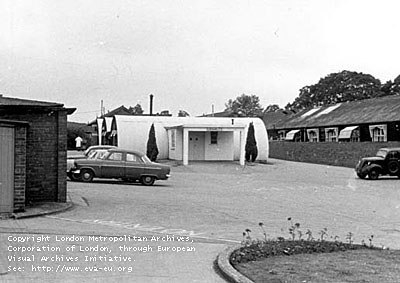 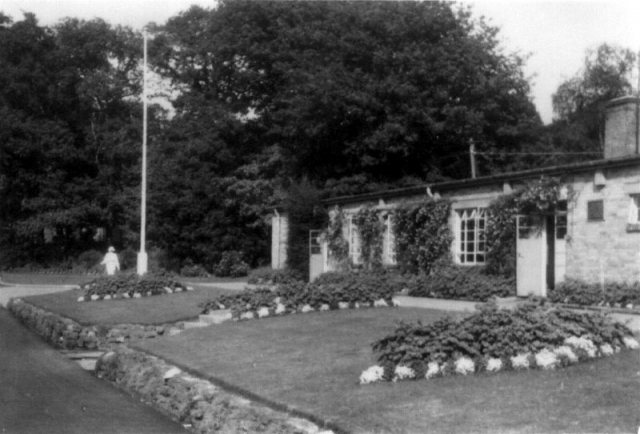 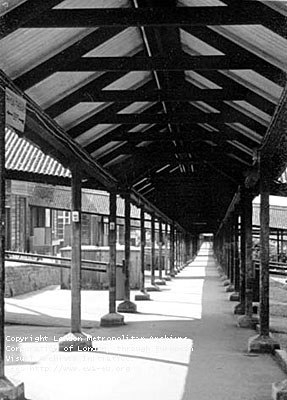 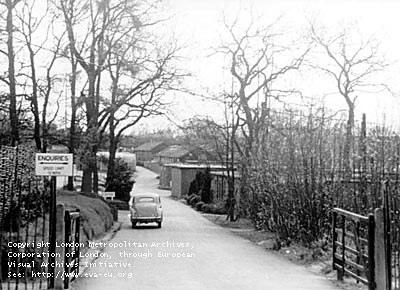 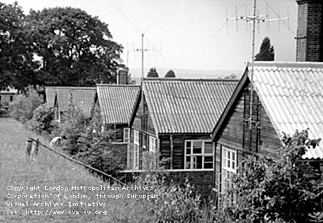 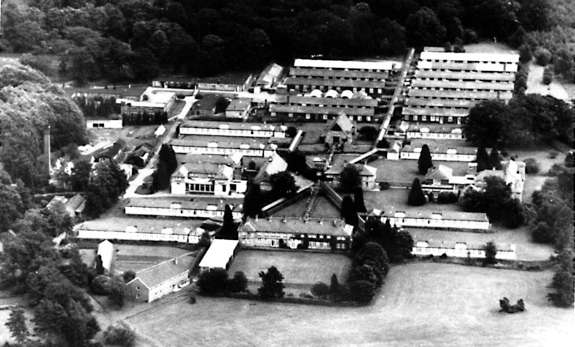 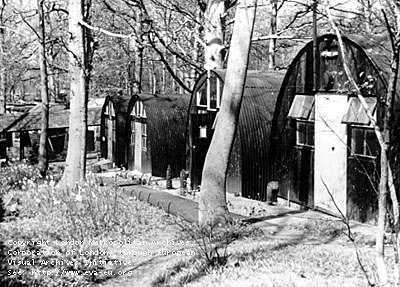 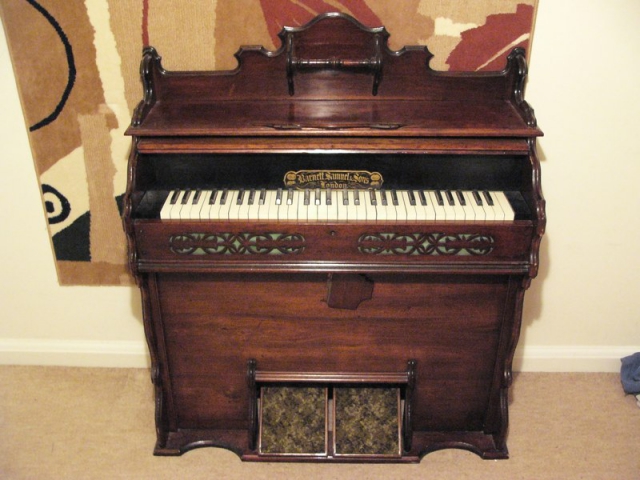 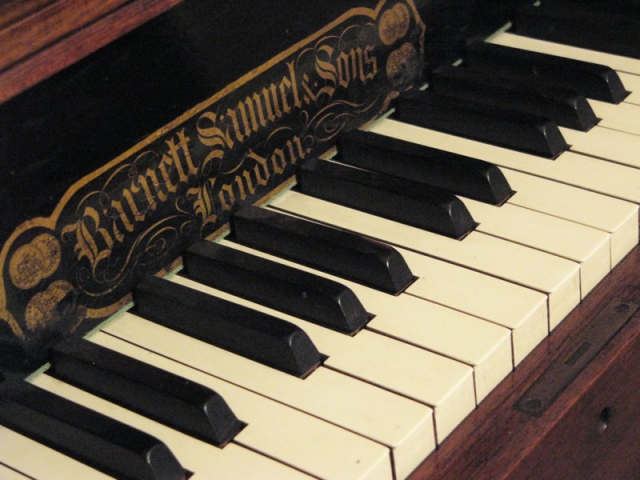 Two poems sum up the opinions of the medical students who were relocated to Hydestile in the early 40’s because of the widespread damage in Lambeth:

At St. Thomas’ amid the fray

Life for all was grim and gay,

The blitz led to a great displacement

For one and all slept in the basement.

But trouble was not far away.

Thus thrice we were directly hit

And lasted but a week of it.

Ere the blows had but occurred

We students all with one accord

Sallied forth to Guildford.

Our arrival at the ancient City

Who preferring us to refugees,

Quickly put us at our ease.

And now that we have settled down,

And grown accustomed to the town,

We find that, far from being alarming,

The people here are very charming.

Work and play can here agree,

And we do dancing and A.R.P.

Has had a pleasant compensation.

A string of superheated wards linked by refrigeration,

Its learned guise, and nurses wise, delight all who perceive it.

It pleases too the student, who knows well he’s soon to leave it.

The healthy aspect of the site, the staff and sisters prudent,

All help the patient to survive the o’er attentive student.

The grassy sward between each ward is used for beds when warmer.

I wouldn’t know. three feet of snow have always hid the former.

The canteen here is working well, run by a gracious team,

Whose daily variations make upon a single theme.

This willing troupe serves rolls and soup, the next will ring the changes,

And levy toll on soup and roll, and thus the menu changes.

Our patients come two days a week by convoy from the city,

And should they number less and less, the more and more’s the pity.

Their places here, it would appear, the chicken-pox does smother.

And nearly half the nursing staff is used to nurse the other.

And if you’re feeling out of sorts and crawling with infection,

Pop into Hydestile any day, and by astute detection,

We’ll catch each germ, and then exterminate and thwart ’em.

But if not cured, then rest assured, you’ll get a fine post-mortem.

As a child, while were living in the huts at the back of the Old Manor Hotel, Witley in the early 1950s, I was admitted to the hospital to have my tonsils and adenoids operated on. So, not surprisingly, the above photos are very evocative for me. I was kept in the hospital for a whole week (no pressure on beds then) and kept on a diet of ice creams which seemed like heaven at the time.

I was one of the children sent for a tonsillectomy from St Thomas’ Hospital. I was very small, aged 3 in 1952/3 but I remember it being a very long week, with no visitors. Obviously had a lasting impression on me ! I seem to remember a wooden bath or maybe sink ? Is that right ? Compared with today’s children’s wards, where parents can stay overnight, it seems a bit barbaric but,I suppose, everyone had their tonsils out in those days and it must have been hard to deal with so many patients. While I was there, someone appropriated… Read more »

St Thomas’s Hospital Milford In 1953 while living at Liphook fell ill with pleurisy, I was given penicillin but it was not effective so it was decided that I had to go to hospital where a stronger antibiotic could be given. I was admitted on June 3rd age 14 and put in a men’s ward, I think there were 16 beds, 8 each side. I was on the right about the third bed along. Three days later was the coronation and I was deemed to be too ill to be able to watch it on the TV so I just… Read more »

Hi Stuart, Thanks for the great recollections. We hope to publish the video interviews with Galton and Simpson who had very similar stories to tell of their time in Milford. I have a feeling they were on the same ward as you.. from 1947 onwards.

My grandmother was here during the war. She had colitis and sadly died there in 1942. I have a couple of letters she wrote from there and one does mention being outside on a very warm day and the fact all the children had been taken outside in their cots and beds to get some sun.

My godmother, a Miss Georgina Minnie Webb, (known to most people as Doris), worked in the hospital, as an orderly as far as I recall, for most of her working life. She was very deaf due to measles as a child and the bombing during the war. She had no know relatives and was befriended by my mother’s family as a teenager. She became my godmother in 1945 and I saw her regularly until her death in 1994. St. Thomas’s was her life and they looked after her well after her retirement. As a child, I used to write to… Read more »

What a super memory Judy.