If Hambledon is to have a new vicar and secure a future for its village church then money must be raised with the help of the local community and its residents.

The challenges facing St Peter’s Church and its continued ministry to the village were outlined by Simon Taylor, rector of the joint benefice of Busbridge and Hambledon, and Andy Dunn, treasurer of Hambledon church, at a packed meeting at the village hall on Thursday evening (March 7th, 2019).

In a rallying call for financial support, Andy said: “We are appealing not just to members of the congregation but to those who value the presence of a church in our village, but who may not wish to attend there regularly.” 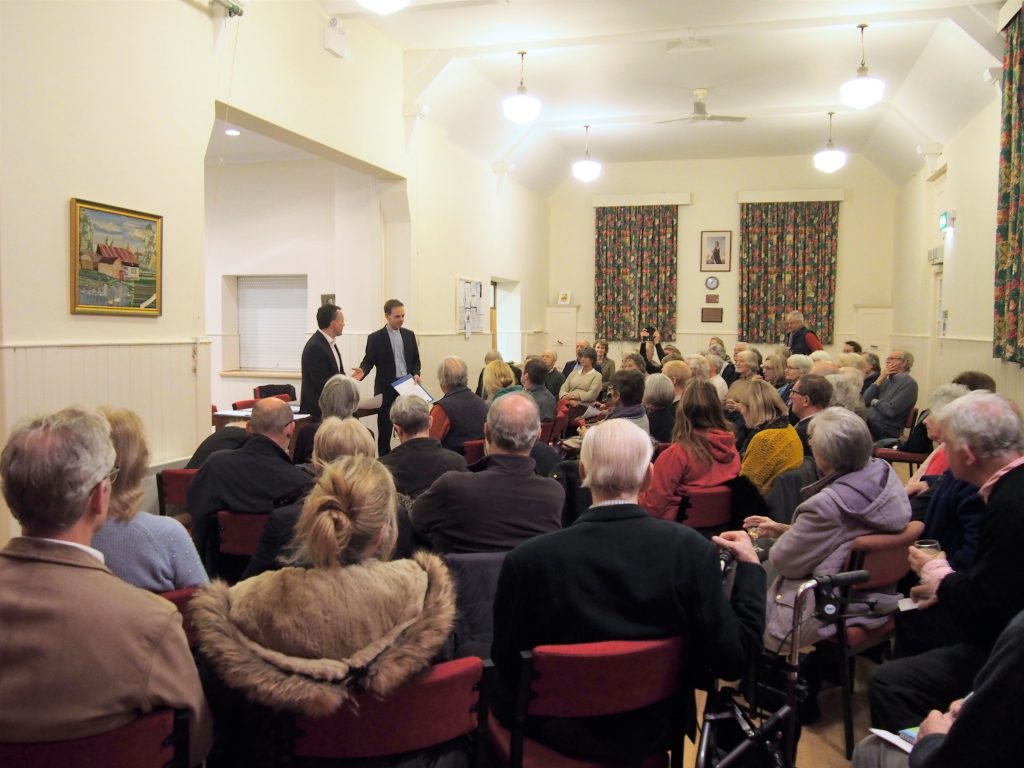 Hambledon has not had a vicar since Catherine McBride moved to a new parish in October 2017. Although it was intended that she would be replaced, several obstacles stalled the process.

Mervil Bottom, the church house in the village, suffered severe water leaks when empty during the following cold winter and required major repairs and renovation. And the parlous state of the church’s finances meant that the Diocese of Guildford questioned whether it was feasible to appoint a new minister.

The biggest single outgoing is £30,000 that St Peter’s has to pay to the Diocese. Second is the £28,000 salary to the vicar, which rises when tax and pensions are added. Then comes maintenance of the church, churchyard, Mervil Bottom and insurances.

Money raised from events such as weddings goes directly to the Church of England and not to the parish church.

The only money that comes to the church is from the Sunday collection plate, Gift Aid, standing orders and donations from generous benefactors and a small grant from Hambledon Parish Council.

In asking for people to consider making financial pledges, Andy said: “If we want to recruit a vicar, we must find £120,000 a year which is significantly more than our current income. The Diocese will only appoint a new minister if we can demonstrate that we can afford it now and for the next five years.”

In a revealing and frank outlining of the current situation, it was clear that Andy and other representatives of St Peter’s have had to do some hard bargaining with the Diocese. The following options were on the negotiating table:

* The Diocese would sell or let Mervil Bottom, leaving Hambledon with no resident vicar. Services would be taken by a visiting vicar living elsewhere, and may have to be reduced.

* Keep Mervil Bottom as a home for a recently retired vicar who would live rent-free in return for working for the parish three days a week, including taking some services.

* Appointing a new vicar as associate minister who, like Catherine McBride, would live at Mervil Bottom and spend most of his or her ministry in Hambledon, but with some time spent in Busbridge.

Mervil Bottom does not belong to St Peter’s and is rented from the Diocese. Until now that was set at one third of market rate. Andy told the meeting that the Diocese wanted to increase that to 70 per cent.

Determined to keep Mervil Bottom and pave the way for a new appointment the St Peter’s team negotiated an agreement that the rental would remain at one third for now, but rising to 50 per cent of the market rate over a period of time.

But this strategy can only succeed if people are prepared to give money to the church. This can be done by way of monthly standing orders, annual payments and donations. Andy thanked those who already give, but asked them to consider if they could increase their contribution.

In a question and answer session that followed it was pointed out that the church brings many benefits to the village and is used for weddings, funeral and baptisms, often by those who do not attend services regularly.

Many made it clear they wanted to keep a resident minister. Other said that Hambledon was a wonderful place to live because it has reopened its shop as a community venture, reopened its primary school as a nursery and supported the cricket and football clubs in helping finance new club houses. It has a thriving pub in the Merry Harriers. The church had an important place in an involved and active community, it was felt.

John Anderson, chairman of Hambledon Parish Council, said it was committed to the continued presence of a church and a vicar in the village and would support measures in ensuring this outcome.

Those who would like to help financially should contact Andrew Dunn at The Cottage, Lane End, Hambledon, Surrey GU8 4HD, by phone on 01428 482113 or 07973 748861 or by email at adunn@candey.com. All gifts will be treated in confidence and known only to the Treasurer.

Additionally, villagers were asked to consider signing a new church electoral roll. This not only enables those registered to vote on church matters but it would demonstrate to the Diocese the strength of the commitment to St Peter’s. The roll is open to anyone who wishes to identify with the church, whether members of the congregation or not.

Forms were handed out at the meeting and are available at the church, from Mary Parker and from the village shop.