Many people have been put off walking the footpath from the Merry Harriers towards Enton and Witley because of its boggy condition. All that has changed, thanks to the efforts of volunteers, as Mike Parry explains.

The Old Road to Witley – Bridleway 186

This will be known to most of us as the path alongside the Merry Harriers to Buss’s Common and beyond and was many years ago an established highway between Hambledon and Witley.

More recently it has been even better known for its very wet condition as for most of the year it has only been passable on foot if wearing waterproof boots. The photograph below was taken in March last year. 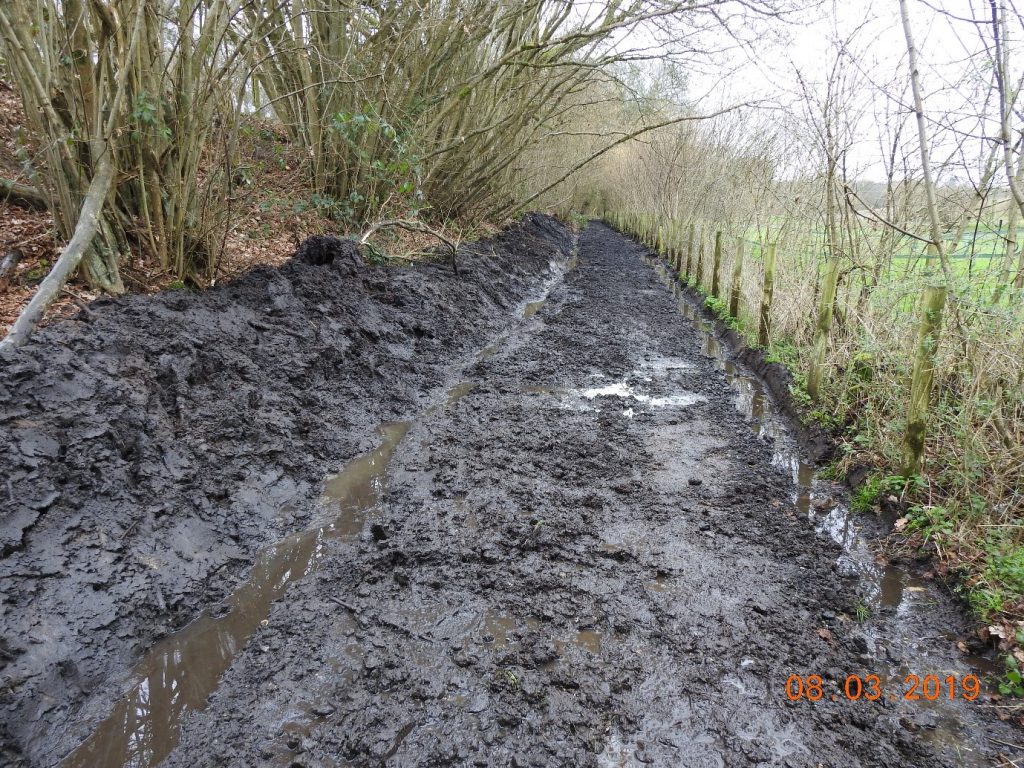 The bridleway was last repaired in 2002 by Surrey County Council and has deteriorated through use and flooding problems since then.

In October 2018 the Parish Council asked for some help from SCC to at least evaluate the possible cost of repairs and a sketch was prepared by the Parish Council with a suggested improvement scheme. Due to a lack of funding at that time there was no further progress until March 2019.

Then in an effort to reduce the ingress of water the Parish Council used Tim Coleman with his mini digger to excavate some trial ditches to better establish the source of the water problem. This produced some very limited improvement to the path. In the meantime some villagers managed to obtain some railway sleepers and bags of gravel but unable at that time to provide a means of moving these, no further action took place for a while. Tim and his mini digger were again employed  in May 2020 to deepen the previous ditch works. This inspired a group of villagers to come together to regrade the ditches by hand digging to improve the flow of groundwater seeping from the hill above the path. This noticeably improved it’s condition.

The group came together because of the lock-down as people had more free time and were keen to get some serious exercise having been working from home. They decided for their benefit and for many others Bridleway 186 is a useful route and its restoration would once again provide a useable link across the village.  Social distancing was considered and only a few people were invited to work together on each occasion to allow this.

Encouraged by the result from reshaping the ditches the group became very enthusiastic and things really took off. More sleepers were bought, 16 tonnes of material were donated by Axtell, The Merry Harriers gave approval to the use of their car park for storage of this; a special narrow tracked dumper was hired at a reduced rate from Shorts at Milford Station together with a plate compactor. A route across Buss’s Common for a few vehicles was negotiated with Stephen Dean who very kindly gave his permission. This access allowed the group to transport some sleepers to the very boggy area at the junction of the bridleway with Buss’s Common. These were needed to build a two span narrow footway bridge across this area which is adjacent to what was an ancient fish pond. The silted up ditch was re-established and partly re-aligned by hand digging to divert the flow under the bridge. A crossing over the ditch for horses was also built. The filling material has been used along the wetter sections of the route and some of these now have raised sleeper walkways to allow walkers to keep out of the mud. Further work continues!

The sleeper bridge has been named “The Corona Bridge” by the “Hambledon Diggers” not just because of the current epidemic but by the name of the beer enjoyed by the Diggers on completion of its construction. 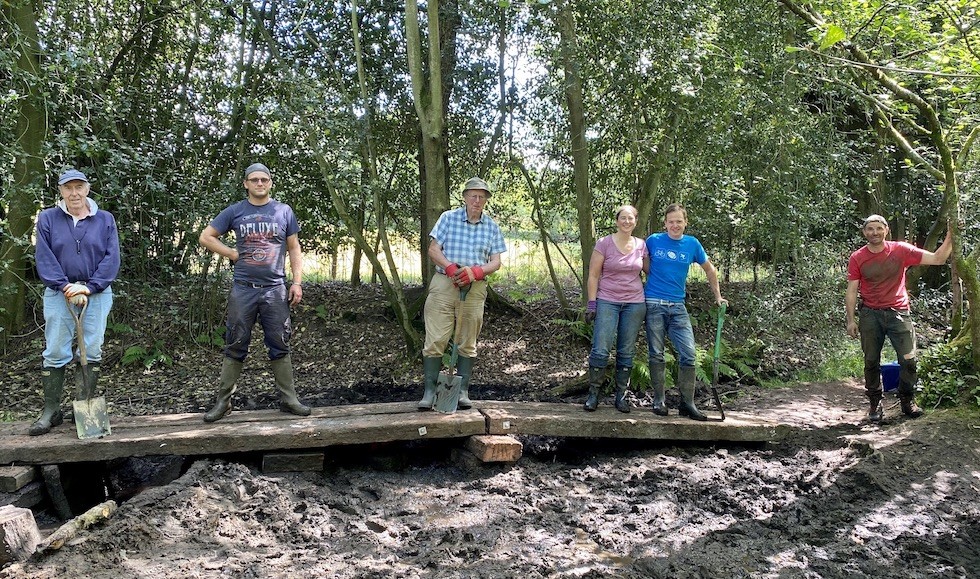 A huge thanks to Axtell of Witley Station, Shorts at Milford, The Merry Harriers and Stephen Dean for their help and generosity. Additionally funds have been given by The Merry Harriers, The Hambledon Festival Committee and Hambledon Parish Council. Thanks also to all the other villagers who have helped in various ways.

The work has been an example of how our villagers are prepared to muck in for a worthy cause and with what is likely to be less funding for village upkeep and maintenance in the future we may need to anticipate more such community involvement over the next few years.

Please enjoy your use of Bridleway 186, the old road from Witley to the Pub, the Church and beyond.

Some of the Diggers 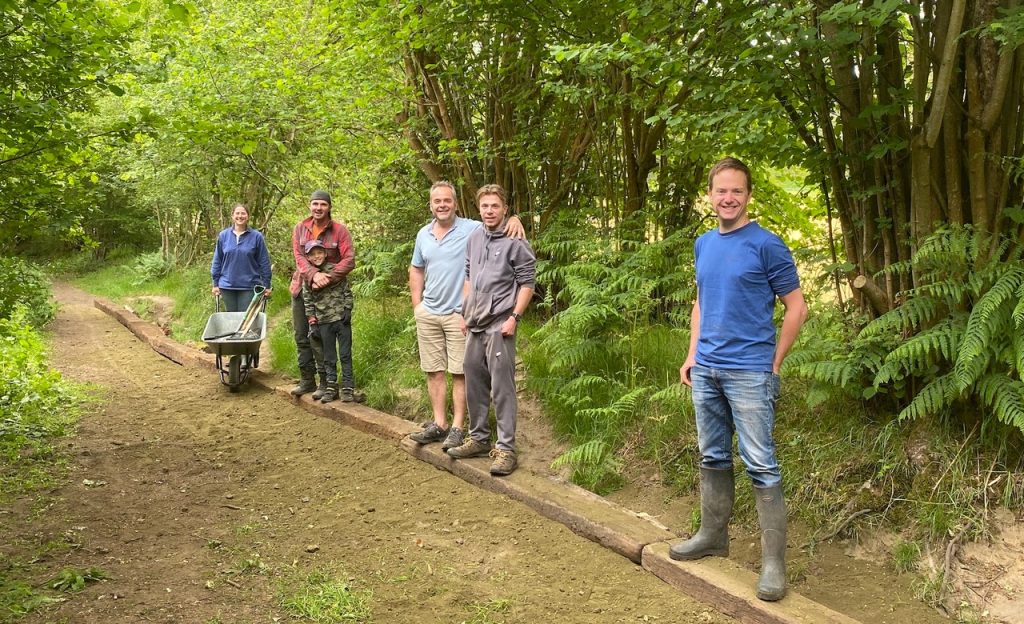 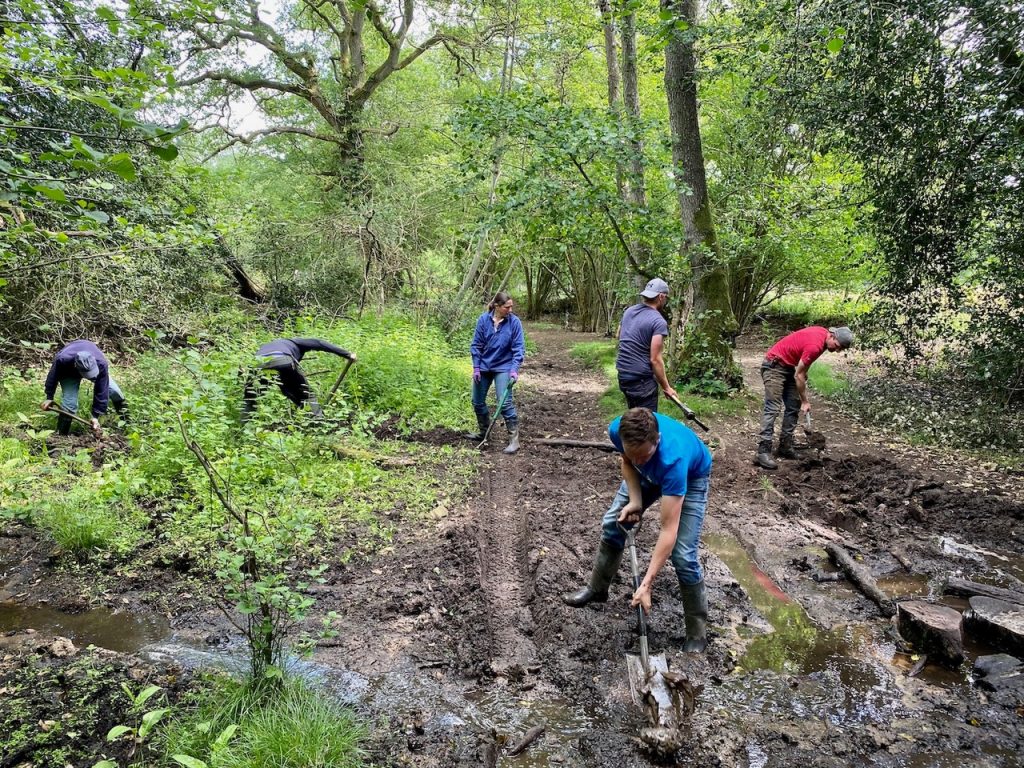 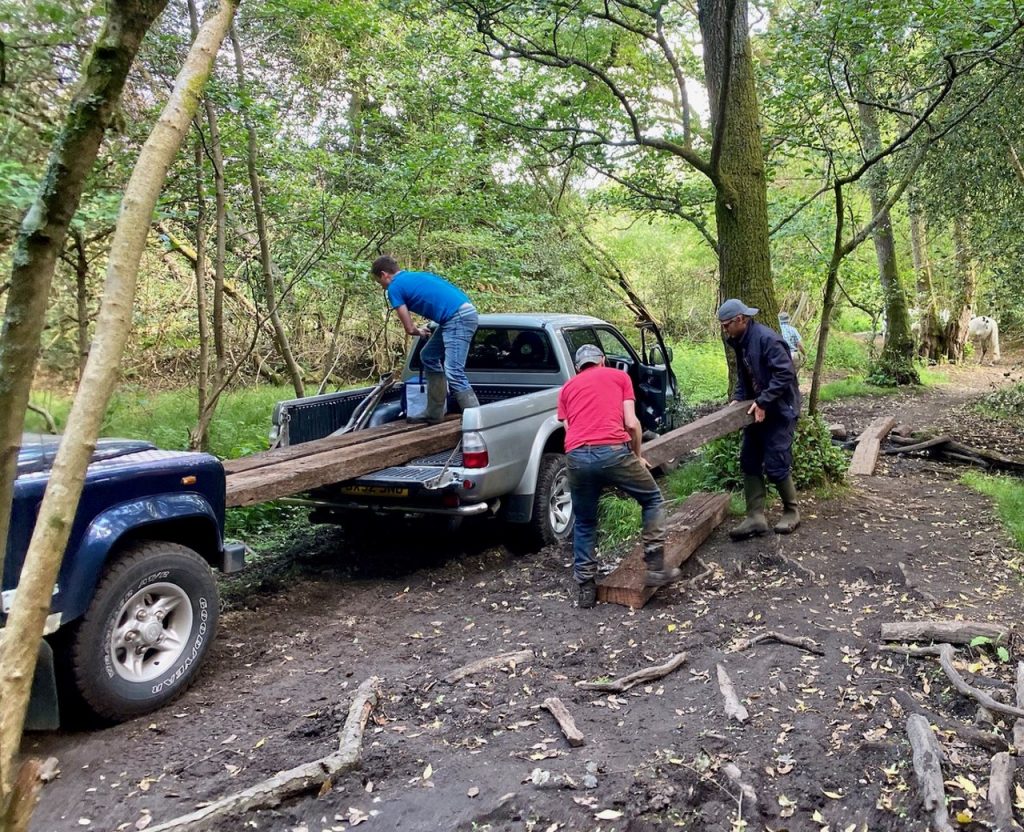 What an amazing and impressive team effort!! That is really brilliant work of which we had no idea was taking place. A hack along there now an absolute must! Well done to you all and thank you for reopening this to us!

Walked the path last Saturday, as part of a walk from Enton to Hambledon Church and back, not realising it had only just been renovated.

This is one of our favourite walks and so nice to see it so dry. We were wondering who did such great work on the path. Mystery solved! Such a great team effort and thank you to everyone who worked on this.

That’s brilliant! Thanks so much to you all. Better than taking the perilous route up by the llama field fence & getting caught up in the branches.

We walked it, by chance, last weekend and could not believe what had happened, amazing improvement, no more wellies in Summer; thank you !

This work is licensed under a Creative Commons Attribution-NonCommercial 4.0 International License.
wpDiscuz
5
0
Would love your thoughts, please comment.x
()
x
| Reply