TWO fully-loaded articulated lorries brought Hambledon Road to a standstill this afternoon as they reversed at a snail’s pace back to the Hydestile Crossroads, unable to negotiate the turn into West Surrey Golf Course at Potters Hill.

The tractor and trailer units damaged trees and had to take great care to avoid overhead cables as they reversed under supervision. It took them approximately 45 minutes to undertake the manoeuvre, and no other traffic could pass while they did so.

The lorries were delivering piping to the course, which has a secondary entrance off the Hambledon Road leading to its maintenance yard as well as several private houses.

One roll of piping caught on branches and a section was bent back, lifting it above the previous load-level and making the operation of avoiding cables even more hazardous. (see photograph) 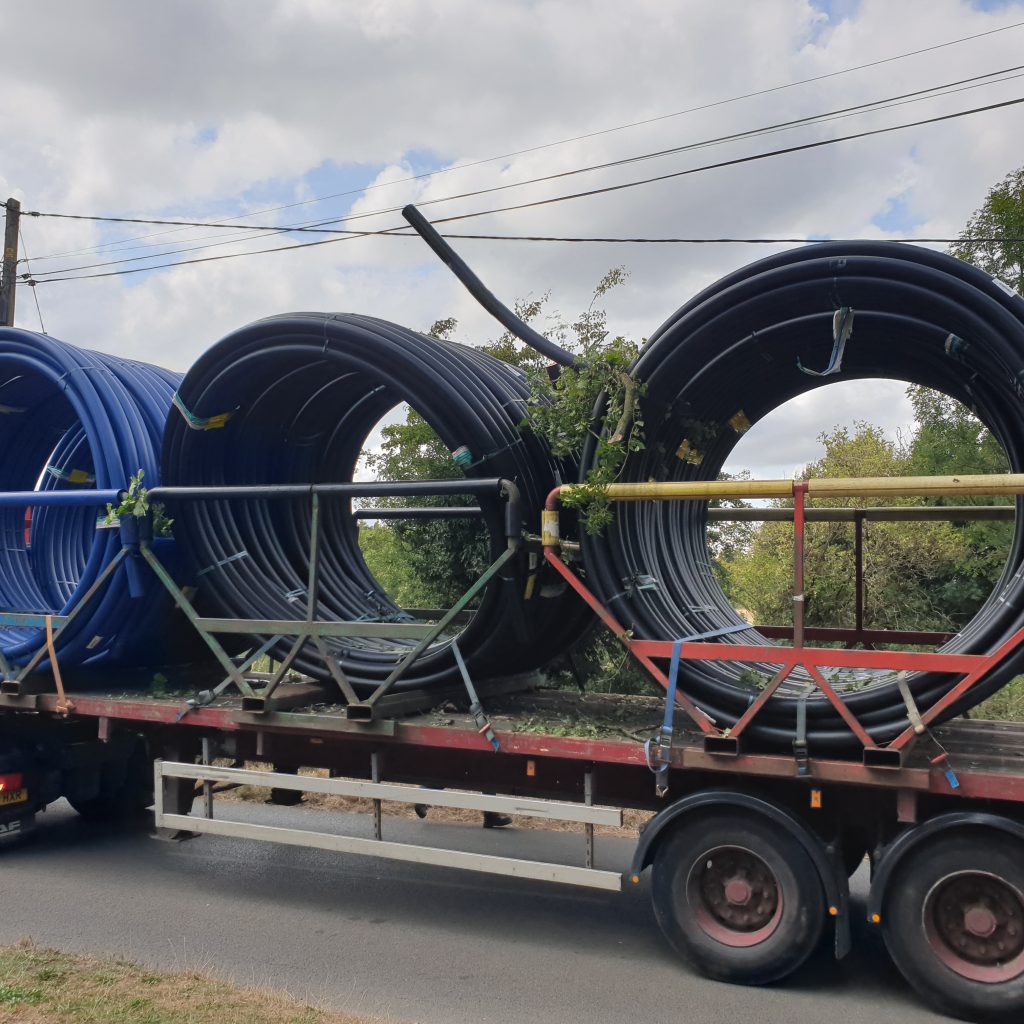 To reach the Hambledon Road the lorries would have passed advisory signs warning that the narrow lanes in and around the village are not appropriate for HGV use.

Several dozen motorists were caught up in the delays and expressed their frustration at the hold-up and anger that lorries of such size were attempting to use such unsuitable lanes. 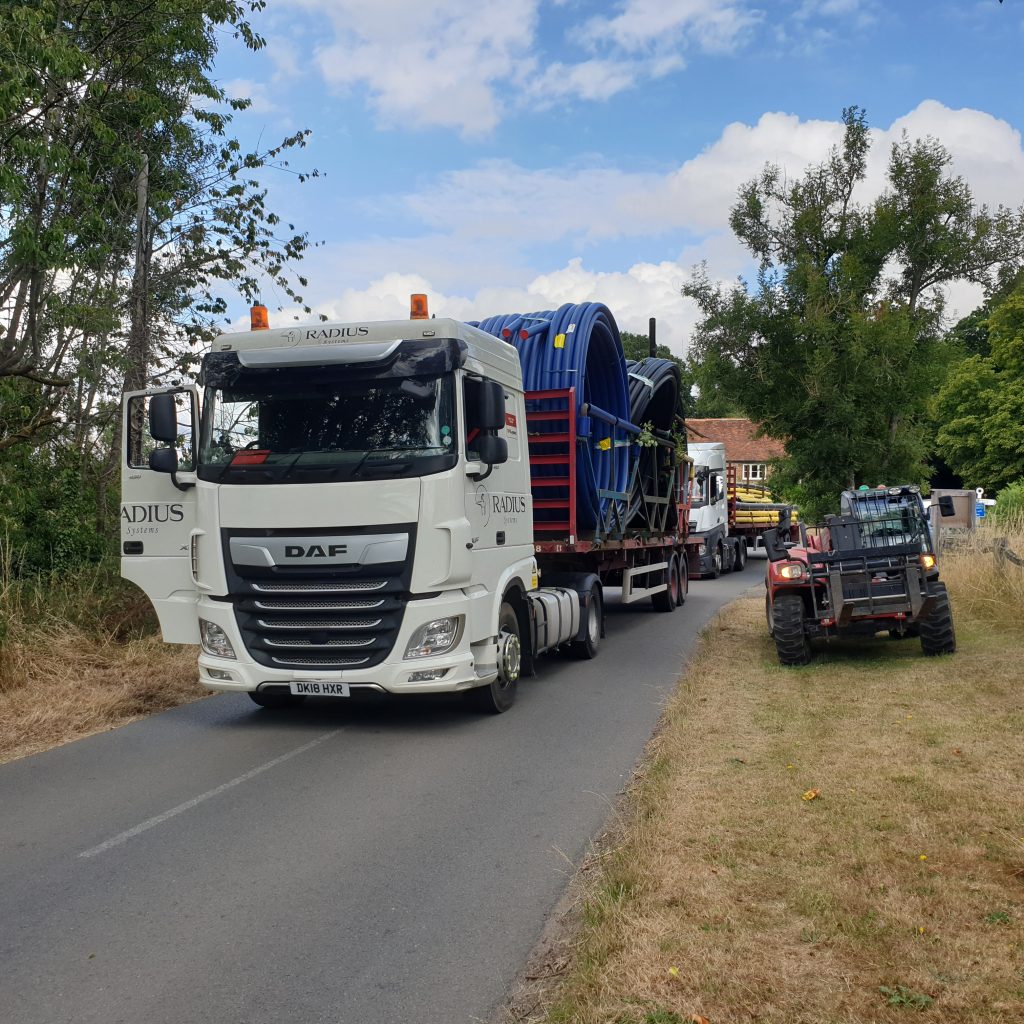 “We do have large deliveries from time-to-time that need to use the Potters Hill entrance. But our suppliers know this route well and it is up to them to ensure they use the appropriate size of vehicle. I expect them to make sure they have the correct lorry capable of delivering the load as well as negotiating the route”.

Among the vehicles held up was another HGV, which had already passed through the very narrow Malthouse Lane and which should not have been on Hambledon Road in the first place. 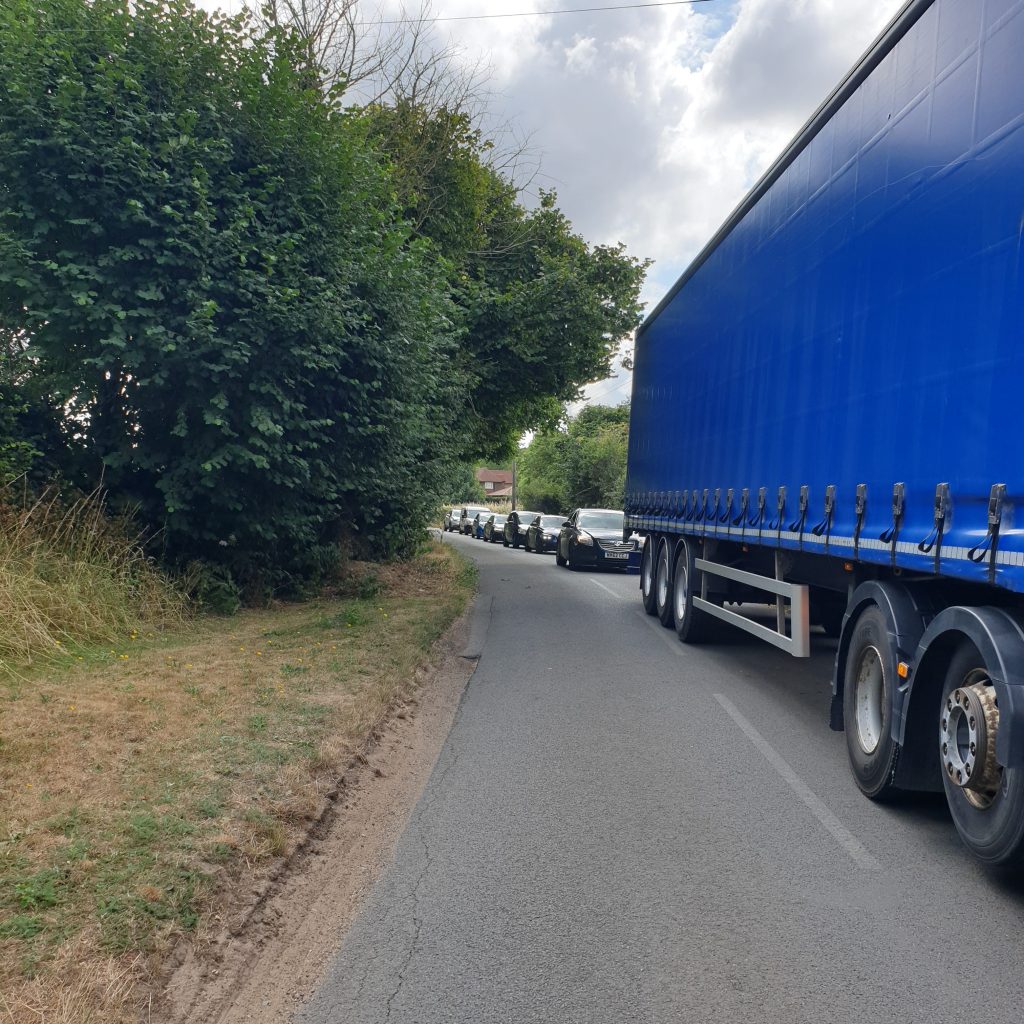 The incident highlights the continued concern of Hambledon residents that roads in the village are being used by HGVs as a cut-through, particularly across the Hydestile Crossroads, Salt Lane and Markwick Lane, a route that connects the A3 at Milford and the A281 near Cranleigh.

Hambledon Parish Council is currently engaged in measures to try and stop this menace and, along with affected residents and other local parishes, is trying to get Surrey Council Council’s highways engineers to introduce enforceable measures to force HGVs to use designated A and B roads.

* Hambledon Road will be closed, potentially for three days, from tomorrow (July 27th) between 8am until 6pm, between Clock Barn Lane and Home Farm Road, Busbridge, to enable the replacement of a decayed pole. The section of Hambledon Road through the village from Lane End to Hydestile Crossroads should remain open.